The Roar’s AFL expert tips and predictions: Round 18

This week marks the end of what’s been both the shortest and longest home-and-away season in some time.

It’s been protracted and extended, barren and cramped, enthralling and exhausting – and it’s all set to finish up now.

There’s a bit to play for in terms of finals jostling, with St Kilda and (more so) the Western Bulldogs vulnerable to both Melbourne and Greater Western Sydney so, thankfully, we’ve got a good reason to tune in.

On the tipping front, the Demons knocking off the Giants has extended my lead atop The Roar’s AFL expert tipping panel to a commanding four points, with Liam Salter now just two points ahead of Marnie Cohen in second. The real winners are, of course, you with 98 points – seven ahead of me.

For one last time before finals, let’s hammer out the tips.

I know we’ve got the pre-season bye coming up, but did we really need to spread this round from Thursday to Monday?

Did they also have to start things off with such a snoozefest? The Eagles have been gifted two byes ahead of the finals – they’ll grind North Melbourne into dust tonight.

Friday night is where things get interesting. St Kilda are probably safe – they’d need to get clobbered here and see Melbourne crush Essendon for them to lose their spot in the eight. It’s very possible, but I just don’t trust the Giants one bit. Saints to flex their muscle and stamp their finals tickets in style.

Melbourne will still be alive when they take on the Bombers to begin Saturday’s slate of matches. If the Demons were in control of their own destiny I’d put my house on them to completely flub it, but they’re only an outside chance of playing finals so they’ll get it done against the Dons.

Richmond will need to have their wits about them when they come up against the form team of the competition in Adelaide. The Crows are full of confidence and I don’t expect them to roll over at all, but the Tigers have too much class to let this one slip. 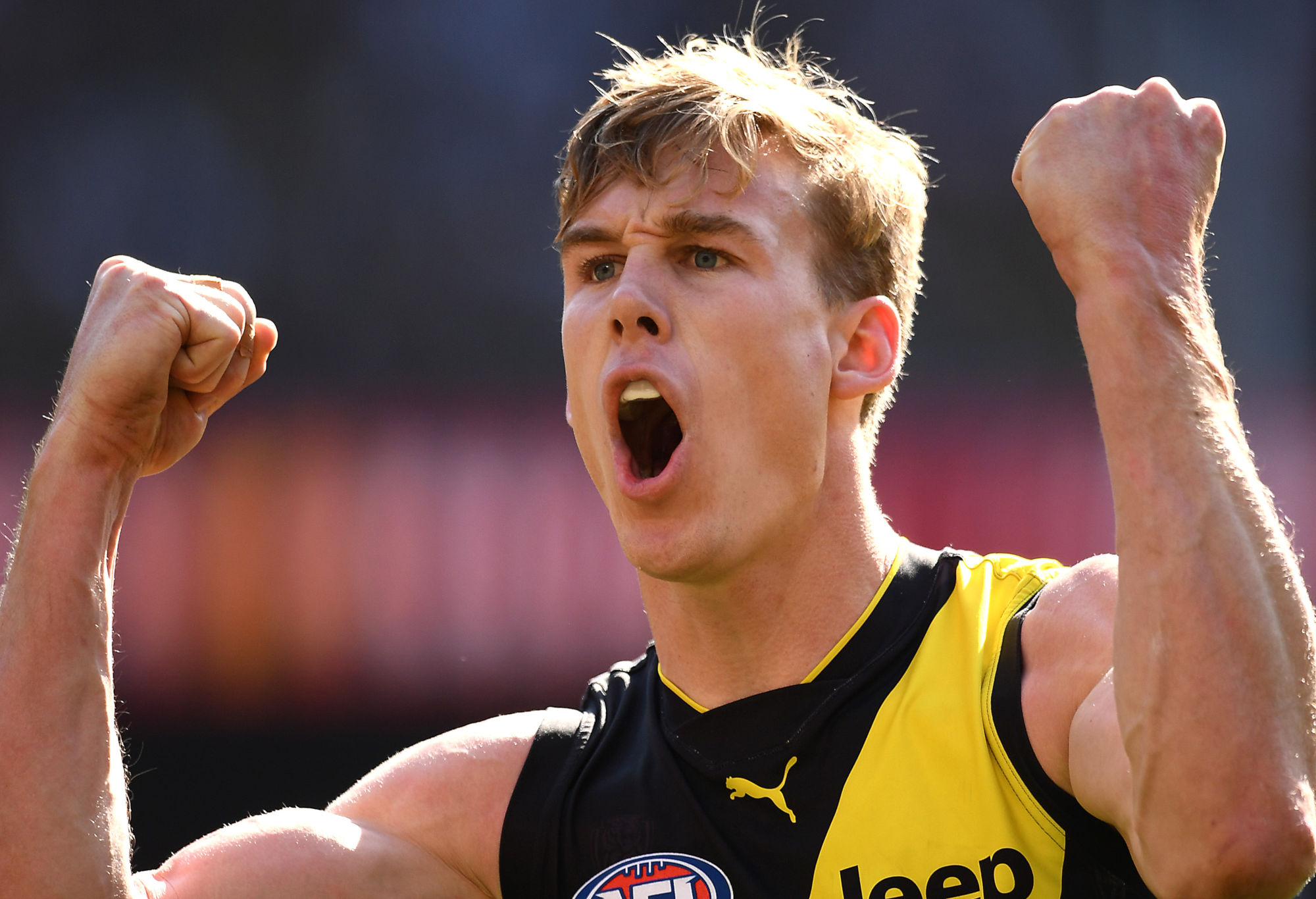 The Tigers should get the job done against Adelaide. (Photo by Quinn Rooney/Getty Images)

Brisbane should have little trouble with Carlton, while Geelong should have a similarly simple time of it against the Swans in Cairns on Sunday – the only opponent the Cats are glad they’re not facing at home.

As awful as the Hawks have been this year, they’ve got too much pride to not go all-in for the farewells of Ben Stratton, Paul Puopolo and (potentially) Isaac Smith. Gold Coast have run out of puff and look vulnerable despite their favouritism.

The Western Bulldogs have a desperately dismal record against Fremantle, especially interstate – they haven’t beaten the Dockers away from Melbourne since Round 1, 2009. That said, they’re finishing the year off strong and should claim the points in an entertaining win.

On Monday night I’ll back the Power to wrap up the minor premiership against Collingwood.

The last Shoe-In of the Week for 2020 simply has to be tonight’s match – if the Kangaroos get within six goals they’re entitled to sing the song afterwards.

The top five sides in the competition have a good chance of winning the premiership. I was wrong about Richmond; I’ve never said they aren’t a good side, I just wasn’t sure they were the team to beat – but they proved against Geelong that they are.

Geelong are incredibly dangerous (especially since they’ll welcome back Joel Selwood and Gary Ablett in time for finals), while West Coast took a step up against the Saints last Thursday night. Port Adelaide and Brisbane are locked in the top two and both sides have clearly had ripping seasons – but my goodness, Richmond are good.

Just such tight defence and they work exceptionally well as a unit. They should knock off the new September specialists, Adelaide, in style and look forward to the finals.

All five top sides should win.

Let’s quickly touch on the Eagles, because their victory last week is being undersold. Sure, it came against a St Kilda that has been shaky all season (more on that in a moment) but that same unit is still sitting in the top eight and were really liking their chances. No Dom Sheed, Luke Shuey or Elliot Yeo and no Jeremy McGovern for a large portion of the game didn’t bother the Eagles – Tim Kelly stood up when it really mattered and he looks more than capable of carrying them come finals time.

Saints have been their own worst enemy, letting victory slip away from them a number of times and now are at risk of missing finals once again. They’ll be fine in the future, if not now, but it would be a real boost for them and their supporters if they could start with this series. Win and they’re in, lose and results have to go their way.

The Giants, on the other hand, have no choice but to win and win big. Even if they do (and I think they will), they’ll need the footy gods to work some magic in a match I’m looking forward to.

Hawthorn will dig deep and produce a victory as a nice send-off for retiring captain Ben Stratton and veteran Paul Puopolo.

While I don’t trust Essendon whatsoever, it would be very Melbourne to lose on Saturday and put a final dagger in their finals chances. The Western Bulldogs, on the other hand, should cement themselves in the top eight with a victory over Freo – but don’t be surprised if the Dockers claim the win in Cairns, they’re criminally underrated.

For those who are set to watch their sides play for the last time in 2020, enjoy it! For those with finals still to come, let’s hope this is the start of a successful series.

My plan for this week: stick to the favourites. It’s unlikely I’m going to catch Stirling, but I also don’t want to disgrace myself by picking the underdogs and having that blow up in my face.

The Kangaroos are no chance at all against the West Coast Eagles, Melbourne will – fortunately – put an end to Essendon’s horrid season by beating them, Geelong should beat Sydney to secure a double chance, and I’ll back the Suns to score a sixth and final win for 2020 over the Hawks.

On Sunday, Brisbane should keep their minor premiership chances alive with a win over Carlton. Should Brisbane do that, that race will be decided by Monday’s clash between Port and Collingwood. While the Pies have already secured finals, they’d still love this win to bolster some middling form, though the Power still have a surprising amount of doubters and not even a win here will change that. 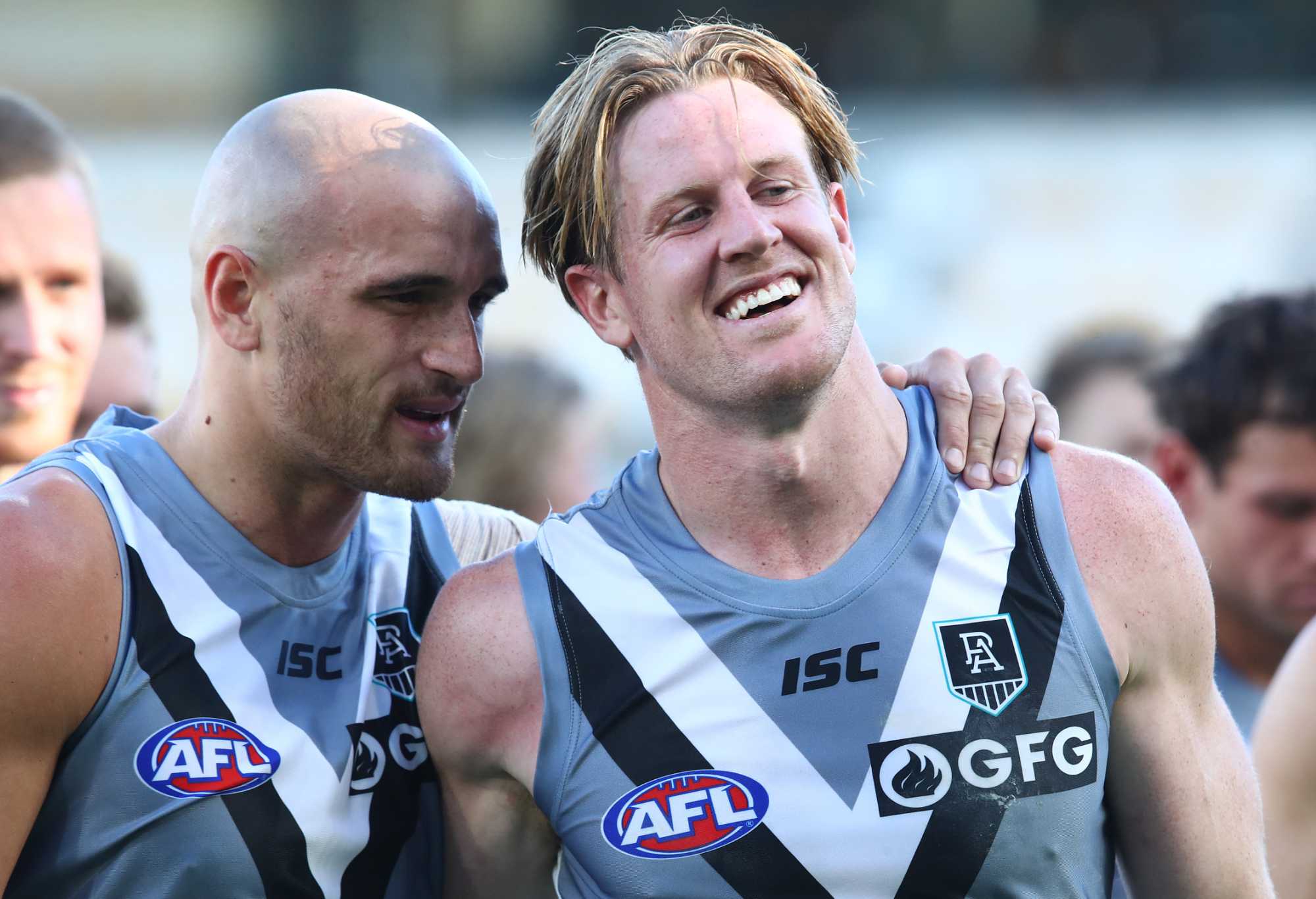 Port should wrap up the minor premiership – but do punters believe they can go further? (Photo by Jono Searle/AFL Photos/via Getty Images)

On form and the fact the Power are simply a better team this year, the South Australians should win this by a couple of goals.

There’s a trio of games that should decide the race for finals. Melbourne’s aforementioned predicted win won’t matter at all if the Saints and Bulldogs win.

St Kilda simply need to win to totally confirm finals and, given the Giants’ collapse in form and the fact the Saints have the motivation behind them, they should do just that.

The Dogs are favourites against Freo, but the Dockers have been great in the past fortnight and would probably like the season to be longer. I just don’t think the Dogs are going to let this one slip: they’ll prevail.

Finally, in what should be a fun game, this week’s premiership favourites, Richmond, are taking on Adelaide, who are very much good again. The Tigers could see a top-four spot disappear if they lose. They needn’t fret: despite their marked improvement, the Crows aren’t at all ‘winning against Richmond’ good.