Here’s Why The Eagles Tanked Their Game 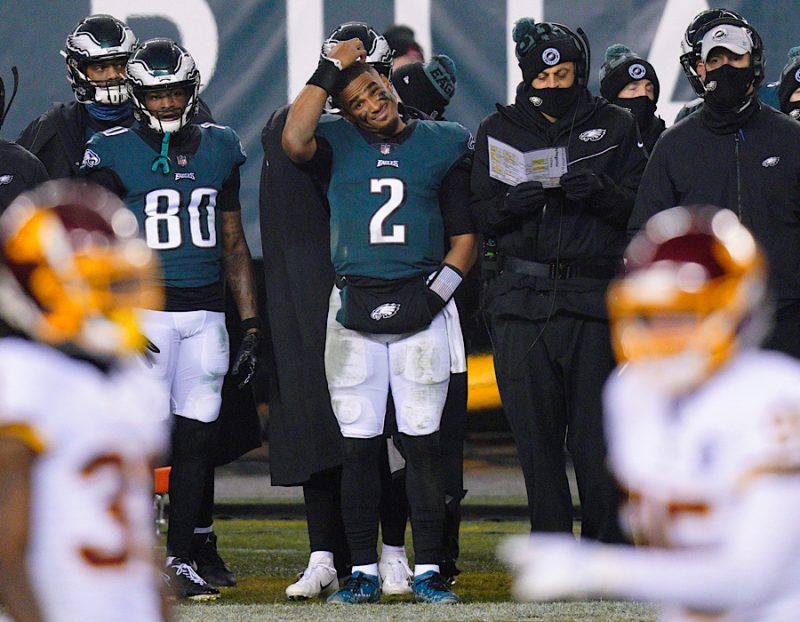 The NFL world is trying to come down on the Philadelphia Eagles for not trying to win their game against Washington Sunday night in a game that decided the winner of the NFC East. At the heart of the criticism is the removal of quarterback Jalen Hurts in favor of third-string backup Nate Sudfeld, a move that by any measure, didn’t increase the Eagles chances of winning, and has teams asking if Philadelphia tanked the game. To fans of the National Football League, I remind you that there are two kinds of tanking, and the one the Eagles employed Sunday night is not as rare as you may think, and believe it or not, is within the right of every franchise to use.

What the Philadelphia Eagles did Sunday night was tank as an organization, not as a team, and yes, there is a difference. I saw members of the Eagles defense trying to make tackles, and yes, I saw members of the offense trying to score points. That’s because this tank job didn’t come from the players in uniform, it rarely does. This tank job came from the ownership and the front office, who clearly told head coach Doug Pederson “don’t win this game.”  All the proof you needed was the pulling of Jalen Hurts in favor of Nate Sudfeld while the game was still winnable, and turning a potential comeback into a sure-fire loss.

Al Michaels and Cris Collinsworth admitted that Pederson told them they were planning to play Nate Sudfeld in Sunday’s game; something the guys in the network broadcast booth shared with the audience after the quarterback switch was made. It was a move that the legendary play-by-play man and the former NFL player said they could not and would not have made, but they never asked themselves if they would have refused to coach the game if they were told to make the move by a team’s general manager, or even the owner.

Was it that important for the Eagles to move from the ninth spot to the sixth spot in the NFL Draft with a loss; or was it better for them to prevent the New York Giants from making the postseason if they had won? Regardless of their motivation, the sad reality is that the Eagles had the right to NOT try and win on Sunday night. Would the NFL and the bosses at NBC have preferred they didn’t quit as an organization on primetime television? Of course, it makes both the franchise and the league look bad, but don’t think for a moment they give a damn about the optics of what they did.

Zach Ertz didn’t leave the field after Sunday night’s game for hours, refusing to believe his time with the Philadelphia Eagles was over. There’s no doubt in my mind that he or any other player on the Eagles were trying to win their game against Washington. This is the same belief I had when I saw the New York Jets win not one, but two games this season as every fan of the franchise wanted them to go 0-16, thus ensuring them the top overall pick in the upcoming NFL Draft. What the Eagles did on Sunday night was not about the players who suited up and played to win, but the guys in three-piece suits.

It's 1:08 in the morning and Carson Wentz, Zach Ertz & Jason Kelce just left the field after staying a long time outside in the rain talking. Have to wonder if they sense this could be the last time they are all together on the same team. pic.twitter.com/RM7zUa34H0

Has there ever been a time before Sunday night that a team tanked a game for selfish or vengeful reasons? Of course, there has been, and guess what, it will happen again in sports. Don’t be upset about it, however, because the Philadelphia Eagles were exercising free will in their choice to do what they did against Washington, and regardless of what the NFL does to them in terms of fines or sanctions, they will live with their choice. The truth is that no matter what we think as fans or what those in the media believe, no team needs to try and win every game they play as an organization, period. A stark reality that hit the NFL in the face on Sunday night.

Here’s Why The Eagles Tanked Their Game | TooAthletic.com

The post Here’s Why The Eagles Tanked Their Game appeared first on TOOATHLETIC TAKES.