Here’s Why The Targeting Rule Is Ok 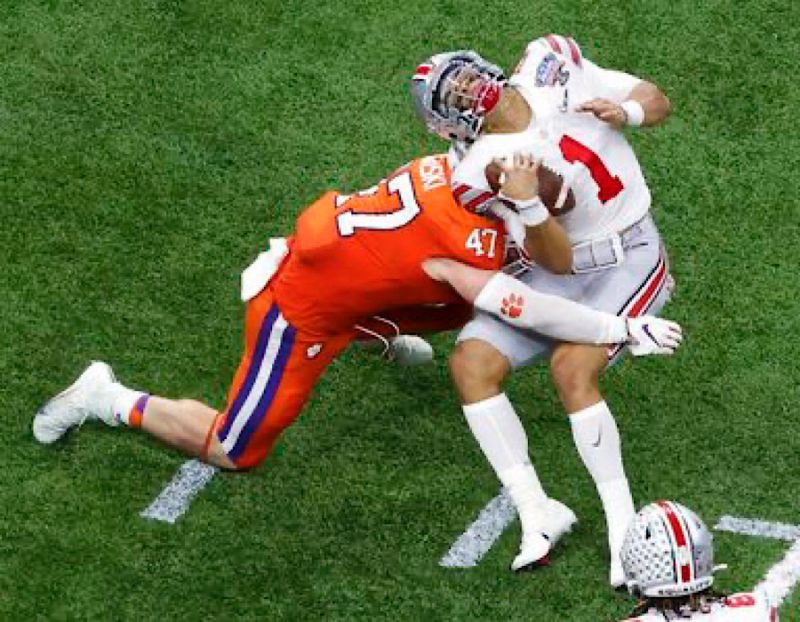 College football began the new year with a debate over how its targeting rule is written and enforced. A play that led to the debate was one that took place during the Sugar Bowl between Clemson and Ohio State. With those inside and outside of college football weighing in on both sides of the issue. However, the question is simple: Does college football need to rewrite its targeting rule, or is the current rule fair in its wording and game day application?

James Skalski is a linebacker for the Clemson Tigers, and during the second quarter of his team’s game against Ohio State, he met Buckeyes quarterback Justin Fields in the open field. Skalski, in preparing to tackle Fields, lowered his body and dropped his head down, making forceful contact with Fields using the crown of his helmet. The tackle is a clear violation of college football’s targeting rule, and after reviewing the play, Skalski was ejected from the game, the second straight year a Clemson player was disqualified from his team’s national semifinal game.

James Skalski was called for targeting and ejected after this hit on Justin Fields. pic.twitter.com/0oqTQCTEDi

Most people on social media were using Skalski’s lack of intent as a defense for why he shouldn’t have been ejected from the game; however, the rule targeting rule clearly states; “No player shall target and make forcible contact against an opponent with the crown of his helmet.” It was the lowering of his head the created the contact between Skalski’s helmet and Fields’ body after the quarterback spun to avoid a tackle, turning his body into where Skalski was waiting head down.

This is straight B.S. for the second straight year in the playoffs this kid from @ClemsonFB named Skalski is ejected for “Targeting.” What is the guy suppose to do? Stand straight up and tackle? I mean, come on! What B.S. I feel so bad for that kid. Why even play defense.#Damn!

I feel sick for Skalski

That was a football hit. Not dirty, no head hunting. No trash talking after.

The rule is flawed.

As Skip Bayless pointed out on Twitter: “The (targeting) rule is the rule, and it’s designed to protect the defensive player as well as the offensive,” and what Skalski did was more dangerous to him than it was to Fields since the linebacker couldn’t see what was coming at him, making it impossible for him to adjust, and putting himself at risk for a neck or head injury with contact. It’s clear people are hung up on the word “targeting,” which implies intent to injury, such as a helmet-to-helmet hit or striking someone with your helmet in the open field while they are defenseless.

The rule is the rule, and it's designed to protect the defensive player as well as the offensive. But I don't think targeting should include leading with the crown of the helmet below the neck. Skalski's hit on Fields was a good football play on a QB who didn't give himself up.

Many football players will tell you that a defender should “see what he’s hitting,” which can only be done by keeping your head up and eyes on the ball carrier. That is the “target” of the targeting rule, to make players keep their head’s up and see what is coming at them, not lower their heads, making them vulnerable to injuries to their head and neck. With this being the second straight year a Clemson player was ejected from a playoff game, it is becoming clear that how the Tigers players are taught how to tackle is not taking into account the targeting rule. Thus, making every time they take a field more dangerous for their defensive players, someone head coach Dabo Swinney should be asked to explain and be held accountable for.

The rule is fine as it is written and enforced, and it is up the coaches to enforce the rule better at practice so it doesn’t become an issue during games, otherwise the next time a player ducks down and hits someone with his head down, they may be seriously injured. Because very often when you are protecting someone, it is not just their immediate safety you are looking after, but their long-term health and well-being as well Which is part of the reason why the targeting rule is written the way it is … it is trying to protect everyone today as well as tomorrow.

Here’s Why The Targeting Rule Is Ok | TooAthletic.com

The post Here’s Why The Targeting Rule Is Ok appeared first on TOOATHLETIC TAKES.