Here’s What Should Happen After Sports Brawls 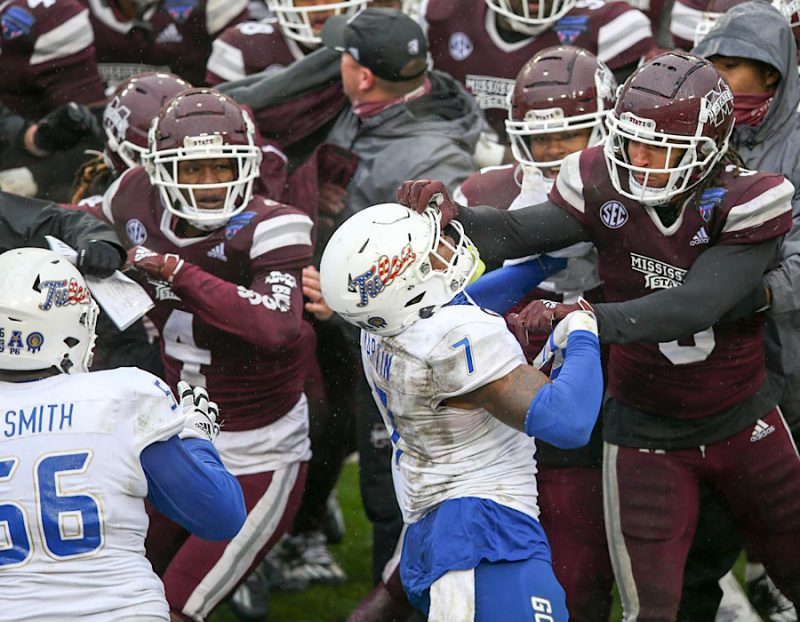 The final day of 2020 provided sports with one of the ugliest moments of the year when a sports brawl broke out between Mississippi State and Tulsa during a college football bowl game. The events at the end of the Armed Forces Bowl were made worse after the game when one of the school’s head coach was caught doing something else other than helping stop the fight, drawing the ire of many as the sport began the new year. So, the question is, how should the coach and the school be punished for the actions of those they are supposed to be teaching and guiding on and off the field?

A massive brawl broke out at the end of the Lockheed Martin Armed Forces Bowl between Tulsa and Mississippi State. pic.twitter.com/zfaq912SWU

The hiring of Mike Leach as the head football coach at Mississippi State created a lot of reaction last year, and after Thursday’s Armed Forces Bowl, the questions surrounding the hire are likely to resurface around the college football world. The reason is simple, not only did his Bulldog players end their game against Tulsa with an ugly sports brawl, but Leach was discovered to be taking photos with fans in the stands after his team’s win, unaware of what was taking place on the field, nor was he able to provide a reason for the brawl unfolding during the postgame handshakes.

Leach’s comments after the game drew a strong response from ESPN’s Kirk Herbstreit Friday morning when he said:

Equally to blame for the events on Thursday are Tulsa head coach Philip Montgomery, who justified his players’ actions by saying:

Mississippi State and Tulsa combined for 18 accepted penalties on Thursday, so perhaps each team should have been escorted off the field without the normal handshakes after the game. Or, if nothing else, after such a chippy game, each coach should have directly told their players to keep thing respectful after the game rather than regressing to a pair of “street gangs,” causing the police at the game to take the field to help break up the fight.

In college football, players don’t set the culture for a team, the head coach does, if for no other reason, players come and go, but the coach is there longer. Even in the case of Mike Leach, who is drawing more of the blame for the fight after a video surfaced of his team having fun with the fact the brawl took place, being a first-year head coach doesn’t mean that he is not setting the tone for how his team behaves on and off the field. Fining a person $100K who makes a nine-figure salary may sound like a harsh penalty, but for a coach who probably makes that much in bonus money for making the bowl game, Leach probably won’t notice the reduction in his check.

The only way to get the attention of these wanna-be rebel coaches is to take away their earning power, which means banning them from bowl games. That action would have schools thinking twice about hiring them or keeping them employed at all since reaching a bowl game is one of those tools used in recruiting, because it provides players a chance to be seen on a national stage and catch the eye of a scout or agent, helping them get a little bit more exposure. Instead, fools like Mike Leach think it’s more important to throw their program into chaos by allowing players to act like he does, and risk their scholarship, and their ability to play the following season.

Perhaps the bigger lesson here is just because someone can win a few football games doesn’t mean they are the best person to serve as teachers or role models for college student-athletes, something that few people would ever call Mike Leach. Since, however, Mississippi State believes they are running a professional football program, they should be treated as such and be forced to forfeit games as punishment for their players’ and coach’s actions. Then, maybe, they will understand what it’s like to be a teacher, since it’s Leach and his bosses that clearly have a few things to learn.

Here’s What Should Happen After Sports Brawls | TooAthletic.com

The post Here’s What Should Happen After Sports Brawls appeared first on TOOATHLETIC TAKES.