I bet you have a great idea for a story right now. In fact, I bet you have several. But can that story idea withstand the length of a novel? If not, have you tried turning your story idea into a premise of a book? 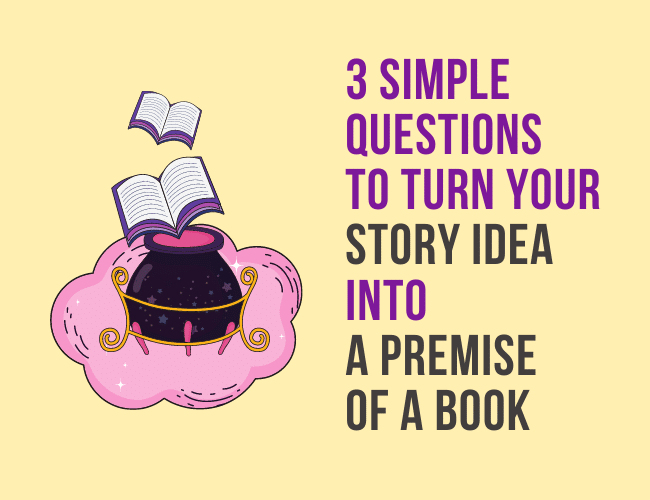 Do you know the difference?

In my early years of writing, I didn’t. And because of this, I’d sit down at my computer, all excited to watch a story or book be born, only to start writing and realize, as many do, that an idea does not a story make.

A story idea is not a premise of a book. And only a premise can uphold a full length 70,000 word plus manuscript.

I’d like to share with your three simple questions to help you stop confusing a story idea with a —so you can draft the later.

How I Learned the Difference Between Idea and Premise

When I first joined The Write Practice back in 2013, the very first assignment I received was to write a short story. I had very little experience with short stories before this, but I did have plenty of ideas.

The idea I had at the time was “shoulder angels for hire.”

In other words, I had the idea for a story where people could hire angels who could guide their lives while sitting on their shoulders, but I didn’t have a premise that pointed at my story’s hero and its big hooks.

So my idea didn’t make a story, even if it was an interesting story idea.

After much finagling, I found the things I was missing, like my protagonist and the irony in my protagonist’s situation, and the idea became a premise:

A lonely widowed doctor seeks to hire a shoulder angel to keep him company, but he has to interview many to find the right one.

This story became my very first proper short story, , which went on to place among the winners in one of .

I owe this completely to having learned how to take a vague idea to an actionable premise.

And I’d love to help you do the same thing with your story idea by sharing three simple questions that helped me turn my idea into a premise of a book.

“
Lots of writers have story ideas, but few know how to turn that idea into a book premise that can sustain the length of a novel. These three simple questions can help you do just that.
Tweet this

The Difference Between a Story Idea vs. Premise of a Book

Perhaps you’ve heard of Edward Morgan Forster, who was an English novelist, short story writer, and essayist. He was also a writer who significantly defined the difference between a story idea and a story with an engaging plot. He used this example to emphasize this:

STORY: The king idea and then queen died.

PLOT: The king died and then the queen died because of grief.

Sometimes even seasoned writers mistake a story idea for a premise of a book, when, in fact, they’re quite different. Just look at Foster’s example. An idea is no substitute for a premise, which provides enough detail to suggest a workable plot.

Just take a look at a difference in the definitions.

A story idea is a thought or suggestion as to a possible story.

An idea is abstract, simple, and full of possibilities. You can often express an idea in a few short words or a simple phrase, like “a red hat that was lost,” or “a couple meets under strange circumstances”, or even “a superhero with a useless superpower.” Hence, the king died and then the queen died.

You can see the idea. You might even imagine some characters involved in the idea.

But there’s not hint at what really throws the characters in the idea off course. Nothing that hints at obstacles that challenge the protagonist from getting a goal—the idea has no hook. It’s just a thought or suggestion to a possible story.

Now look at the premise of a book. You could define this like so:

The premise of a book is the foundational concept of a story told in three parts: a character, a goal, and the obstacle standing in the character’s way.

Unlike an idea, a premise is more concrete and reads more like the brief summary of a complete story.

A premise does not have to be long, perhaps only two to three sentences, but it is enough to provide the skeleton for your story plot. In Foster’s example, telling why the queen died (because of grief) is far more significant than saying that she died, too.

“
A premise doesn’t have to be long, but it does need to identify WHY your protagonist is the least unlikely hero in their story, WHAT they want, and HOW they will try to get this want.
Tweet this

Now you have a story, and readers will anticipate the why while also questioning how her grief brings her to her own end.

To help you tell the difference between your own story ideas and premises, use these three simple questions.

3 Simple Questions to Create the Premise of a Book

Let’s start with an idea.

I generated this idea from a random idea generator, which provides a random character and a character trait. (A , after all, is the center of most stories.)

A witch-in-training who has many controversial opinions.

Not a bad starting point. Having this as a jumping-off point, the first thing I want to do is make it as specific as possible. “Controversial opinions” can mean a lot of things.

What’s controversial for a witch?

This idea is now more specific and actionable. But where is the story?

By itself, this idea is only a character and a trait.

Many writers get stuck in this step and don’t know how to proceed. They may tinkle with the idea a little, try to write it into a story, find that it goes nowhere, and later abandon it.

But it doesn’t have to be that way.

To make an idea into a premise, ask these three important questions:

The question of why is perhaps the most important question when it comes to your main character.

Ask yourself, why is your idea what it is? What makes the young witch dislike magic? Why is the witch the least likely hero for the story?

Is it a physical reason (she can’t perform magic)? Is it an ideological reason (she feels it’s wrong to do magic)? Or Is it a reason thrust upon her by life experiences (a loved one was killed by magic)?

There are endless reasons your character is the way they are, but once you find that perfect reason, the story tells itself.

For our story, I’ve picked the following reason:

Esme, a witch-in-training, dislikes magic because she thinks technology is easier.

See the irony here? A witch who dislikes magic, which makes her the least likely hero for her story—and far more interesting than a witch who likes magic—in this idea.

The next big question is what.

Every story has a goal, that thing that takes the plot from point A to point B.

What is it that your character is trying to accomplish? Is it a prize (winning a magic contest)? Is it a personal goal (be able to master certain magical tasks)? Is it to please someone (grandma really wants her to learn magic)? It could even be a goal of avoiding something (keeping people from finding out she’s not good at magic).

For our witch Esme, I’ve picked the following goal:

Knowing the protagonist’s goal is essential to turning an idea into a premise because it gives the protagonist a reason to move. And only with movement can there be a plot.

The last big question is how, as in how will your character accomplish their goal (the what)?

The tricky thing about the how is that it’s often influenced by the why. How your character goes about accomplishing this goal depends heavily on their reasons for getting to this point in their life.

Keep in mind that the same why can influence the how in more than one way.

For instance, Esme, the technology-loving witch, can be faced with many outcomes in this potion-making contest.

Her affinity for technology could offer her unusual insights in how to create the potions that other witches don’t see. Or her reliance on machines might give her a handicap when presented with an all-magical challenge.

Or maybe she starts out thinking she has a disadvantage, and some unforeseen circumstances turn it into an advantage.

For Esme the witch, the most obvious outcome for her is that she either wins the contest or loses. I’ve selected that she wins and chosen the following course of action for how as an example:

Esme wins the contest unexpectedly by using a microwave to heat her potion quickly.

Knowing how your character will accomplish their goal is important to constructing the story, since without this knowledge it’s likely you’ll run into plot holes, which could easily confuse or distract you.

Which could prevent you from finishing your story or manuscript.

If you need help creating conflict for you protagonist—before considering the how—you might enjoy reading about these .

Use the 3 Questions to Write YOUR Story’s Premise

With the why, what, and how answered, you are now ready to put together a solid premise for a book. Here’s the idea:

And here’s the premise:

Esme, a witch-in-training who prefers the convenience of technology to magic spells, enters a potion-making contest. Although she initially has difficulty keeping up with the other witches, she wins after discovering that heating up potions in a microwave is much faster than a cauldron.

The premise can grow endlessly from here. It can become a short fiction, a novella, a novel, or even a series. You can build a whole world around Esme the tech-loving witch.

But making the jump to any one of those is now a lot easier because you have more than just a vague idea—you have a solid premise.

Still need help writing your story’s premise? Use the Write Practice to turn your idea into a book-worthy story!

More Premise Questions to Ask Yourself

What else can you do to create a good premise? Here are a few questions to help you take these steps even further:

1. What genre are you writing?

2. What kind of tone or mood are you trying to create?

Knowing whether you want to write a comedy (happy ending) or tragedy (sad ending) can strongly affect the “why” and “how” of your premise.

What lesson do you want your readers to learn? How and why your character goes about achieving their goal ties directly to the theme of your story.

The premise can help you establish an early view of what that theme looks like. And if you know your theme, you probably have a strong reason why this book premise is worth your time, focus, and passion.

What questions do you ask to write your story’s premise? Let us know in .

It’s your turn to transform a simple idea into an exciting premise. For the next , follow these steps:

First, choose a character from the list below (or come up with one of your own!):


Then, give your character a trait. What’s something interesting or unusual about them?

Now, answer the premise-building questions from this article:

Once you’ve answered these questions, combine your answers into a one- or two-sentence premise. Share this in the section for feedback, and don’t forget to support the other writers by commenting on their premise, too!