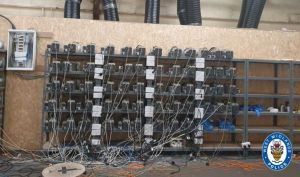 Police in the UK made a surprising miscalculation when they raided what they thought was an indoor pot farm.

Instead of weed plants growing under intense lamps, the cops say they found about 100 computers dedicated to mining Bitcoin, . Though weed is still illegal in the UK, it still seems like a decidedly 21st-century turn to see Bitcoin farms taking the place of indoor weed grows — both decidedly as far as the environment is concerned.

The police raided the Bitcoin farm after spotting unusual ventilation and detecting excess heat coming from the building — often a hallmark sign that someone is running high-wattage lights for sunlight-hungry pot plants.

While Bitcoin isn’t illegal, the police also say found that the miners were stealing electricity to compensate for the obscene energy cost of these professional setups, according to CNBC.

Bitcoin uses even more electricity than some , as mining computers strain to solve the math problems that allow them to mine more of the crypto. That’s seemingly what created the huge amount of heat the UK police spotted.

More on Bitcoin and the environment: