Amazon Says Sad Workers Can Shut Themselves in “Despair Closet” 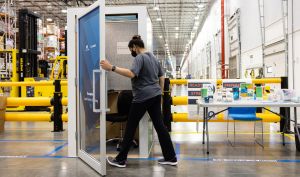 Amazon is being roasted for sharing a video of its “AmaZen,” a phonebooth-sized box where employees can go to “focus on their mental wellbeing.”

In other words, one of the largest companies in the world is offering its overworked employees a, well, box to sit in to watch mindfulness videos.

It’s a out-of-touch move for a company that already has a poor track record of squeezing every last drop of productivity out of its countless warehouse workers — and offering very little in return.

And that’s not to mention Amazon’s of aggressively campaigning against worker unionization.

Just last month, the e-retailer it had tried to cover up the fact its drivers have to routinely pee in water bottles.

Amazon claims its “AmaZen” can guide “employees through mindfulness practices in individual interactive kiosks at buildings,” according to a .

In practice, it’s essentially a stripped down photo booth with a computer inside, placed in the middle of an Amazon warehouse. It’s unclear exactly which employees Amazon is targeting with its kiosk, but given its strategic placement suggests it’s meant for workers inside its many fulfillment centers.

A YouTube reupload of a clip showing the booth, as , shows the tiny booth in action. In the short clip, the dystopian box is being described as a “place that’s quiet, that people could go and focus on their mental and emotional well-being” by Amazon employee and box inventor Leila Brown.

“The ZenBooth is an interactive kiosk where you can navigate through a library of mental health and mindful practices to recharge the internal battery,” Brown says in the video.

As expected, Amazon is getting ridiculed for its mindfulness kiosks on social media.

“I feel like livable wages and working conditions are better than a mobile Despair Closet,” writer Talia Levin.

The company however paints the AmaZen as the perfect home away from home through glowing endorsements.

“Self-care is important, and AmaZen gives me an opportunity to take time for myself to just pause and regroup which helps me be better at work,” Amazon fulfillment center employee Katie Miller said in the company’s press release.

“When I take that time, I come back to work more focused, and it has a lasting effect on the rest of my day,” she said.

Amazon warehouse conditions are infamously grueling, , a severe for delivery drivers, as well as chances of workplace injury.

And a simple enclosed box isn’t likely to solve the issues. The so-called “ZenBooth” or “Mindful Practice Room” is part of what Amazon calls its “WorkingWell program.”

The $300 million program is meant to improve the health and safety of its employees and allow them to “recharge and reenergize,” according to the press release.

If the program, “AmaZen” booths included, will be enough to have a positive effect on the mental well being of its warehouse staff remains to be seen.