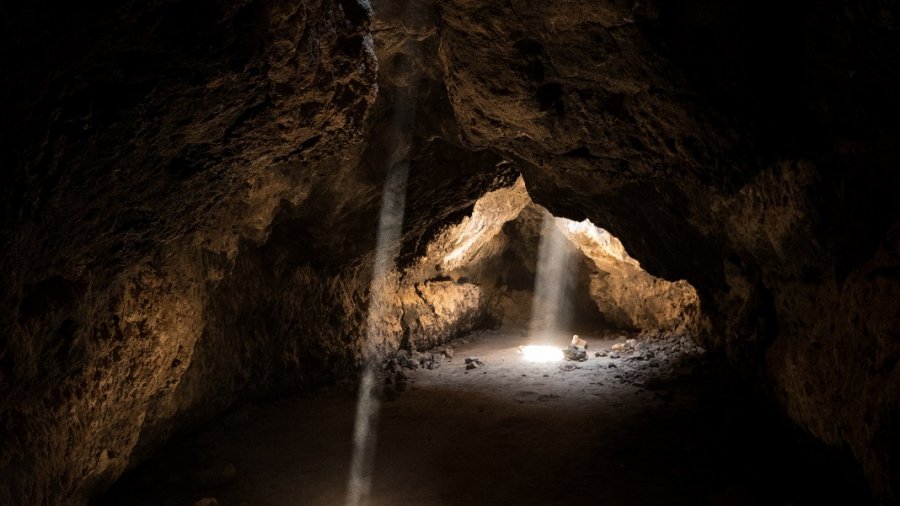 However, the remains of a child buried almost 80,000 years ago under an overhang at Panga ya Saidi cave in Kenya is providing important new details.

Working with a team of researchers from Kenya, Germany, Spain, France, Australia, Canada, South Africa, the United Kingdom, and the United States, we studied the burial. Our results, , reveal valuable insights into human cultural evolution, including how Middle Stone Age populations interacted with the dead.

Around 78,000 years ago, a small child was carefully placed on their right side in a shallow pit in a cave near Kenya’s coast. Their legs were raised to their chest in a flexed position, and their body wrapped in a special cloth, perhaps an animal skin.

The child’s head was placed gently on some kind of perishable support, a pillow in readiness for the long sleep. As a final act, the child was deliberately covered over with dirt from the cave floor and left for thousands of years, slowly becoming buried under another three meters of soil.

Panga ya Saidi is roughly 15 kilometers from the Kenyan coast. Our team first visited in 2010 as part of an archaeological project on the origins of East Africa’s Indian Ocean trade.

When we first entered the cave with our colleagues from the National Museums of Kenya, we knew the site was special. The limestone walls towered some 20-30 meters above us, creating a cool microclimate for forest plants to thrive and humans and animals to take shelter. The cave is sacred to the Mijikenda people who occupy the area today.

With permission from the local community to conduct our research, we embarked on what has become a decade-long process of discovery at the cave. We quickly realized the site held far greater significance for understanding human evolution than we originally thought.

But our most exciting find came in our third field season in 2013, when the shallow pit containing Mtoto’s burial was exposed some three meters below the cave floor.

The remains were so fragile, our team had to cover them in plaster and remove them intact with the block of sediment in which they were buried. The block was sent first to the National Museum in Nairobi, then to our collaborator Maria Martinón-Torres at the National Research Center on Human Evolution (CENIEH) in Spain, who is a leading expert in hominin paleobiology.

Martinón-Torres and her team spent months painstakingly excavating and documenting the remains in her laboratory, revealing not only that the remains belonged to a modern human (Homo sapiens), but a small child.

Mtoto’s preservation was remarkable. The skull and face bones, including the jawbone, were still articulated. Based on the shapes of the teeth, Martinón-Torres was able to determine that the child was just two and a half to three years of age.

Microscopic analysis of the bones and surrounding soil confirmed that the body was rapidly covered after burial and that decomposition took place in the pit. In other words, Mtoto was intentionally buried shortly after death.

Furthermore, the position of Mtoto’s flexed body, found lying on the right side with knees drawn toward the chest, suggests it was a tightly shrouded burial with deliberate preparation. The position of the head and the way it had collapsed in the pit suggested a pillow of some kind may have been used, indicating the community may have undertaken some form of funerary rite.

Our next big question was the age of the burial. The bones were too old for radiocarbon dating, which only works well on organic remains from the past 40,000 years or so.

We turned instead to a method called luminescence dating, which measures when quartz grains in the sediment were last exposed to light (that is, when they were buried). The luminescence dates securely placed Mtoto’s burial at 78,000 years ago, making it the oldest known human burial in Africa.

The Panga ya Saidi burial is a major breakthrough for understanding how early populations in Africa treated their dead, allowing us to start situating these behaviors alongside what we know about how culture developed in other regions.

Child and juvenile burials are not uncommon in the Eurasian record, and now we have definitive evidence for not just intentional burial at 78,000 years ago in Africa, but the burial of a young child. This suggests a kind of special treatment of the young, with complex emotions of mourning linked to complex social behaviors.

Interestingly, the burial was not accompanied by any grave goods or personal ornaments, as have been found with early burials elsewhere in Africa and Eurasia.

The burial is also significant because of its association with stone tools belonging to the Middle Stone Age tradition, which has been linked to more than one hominin species, including both modern and archaic Homo sapiens. At Panga ya Saidi, we can definitively state that modern Homo sapiens manufactured these stone tools, providing some clarification on the nature of early technology and tool use.

In fact, the earliest symbolic ornaments at Panga ya Saidi, in the form of cone snail shell beads, only appear some 10,000 years after Mtoto’s burial. Associated with the burial, though, is a fragment of Giant African land snail shell that bears evidence of incisions from a pointed instrument or tool. While we cannot interpret this evidence symbolically, it does show some form of human modification.

We can also derive new information about the anatomical evolution of our species. A comparison of Mtoto’s teeth with a representative sample of Neanderthal teeth as well as those from recent and fossil Homo sapiens showed that, although they were clearly modern human, they also have some primitive features.

This supports recent archaeological and genetic research suggesting our species didn’t evolve from a single population in one region of Africa. Rather, modern human populations living in different parts of Africa looked different to one another and followed different evolutionary trajectories.

The authors would like to acknowledge the invaluable contribution of our research partners at the National Museums of Kenya (NMK) in Nairobi, Fort Jesus Museum in Mombasa, and the Coastal Forest Conservation Unit in Kilifi, Kenya, particularly Dr. Emmanuel Ndiema, without whose support and involvement this research would not have been possible.