The ask was formidable: update the Victorian-era townhouse; restore some of the period details that had been removed in an ill-conceived 1980s renovation; bring more light into the building, which had just two exposures (at the front and back); carve out a functional, client-ready office space that would feel separate from the rest of the home. And P.S., the building has a footprint of just 10 by 50 feet.

Fortunately, the architect, Michael Godmer, was more than up for the challenge. It was his house, after all. Michael shares the sliver of a home—three stories tall but skinny as can be—with his partner Mathieu Turgeon. The two had originally planned on overhauling only the kitchen, but then, in Michael’s words, “we began to scrap everything including the exterior.”

Good thing they did, because the results are transformative. Let’s take a tour of Maison Boutique Coloniale, their name for the project, and see how they turned their small and dreary townhouse in Montreal into a clean, well-lighted space suitable for work and home.

Photography by Maxime Brouillette, courtesy of . 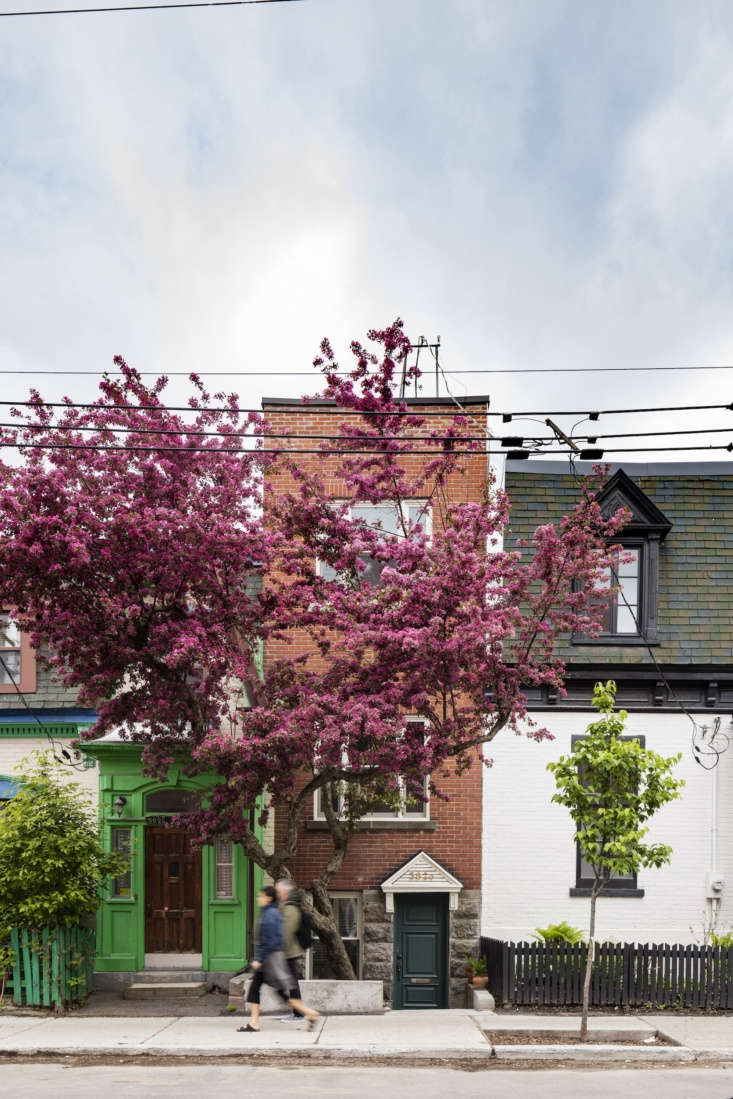 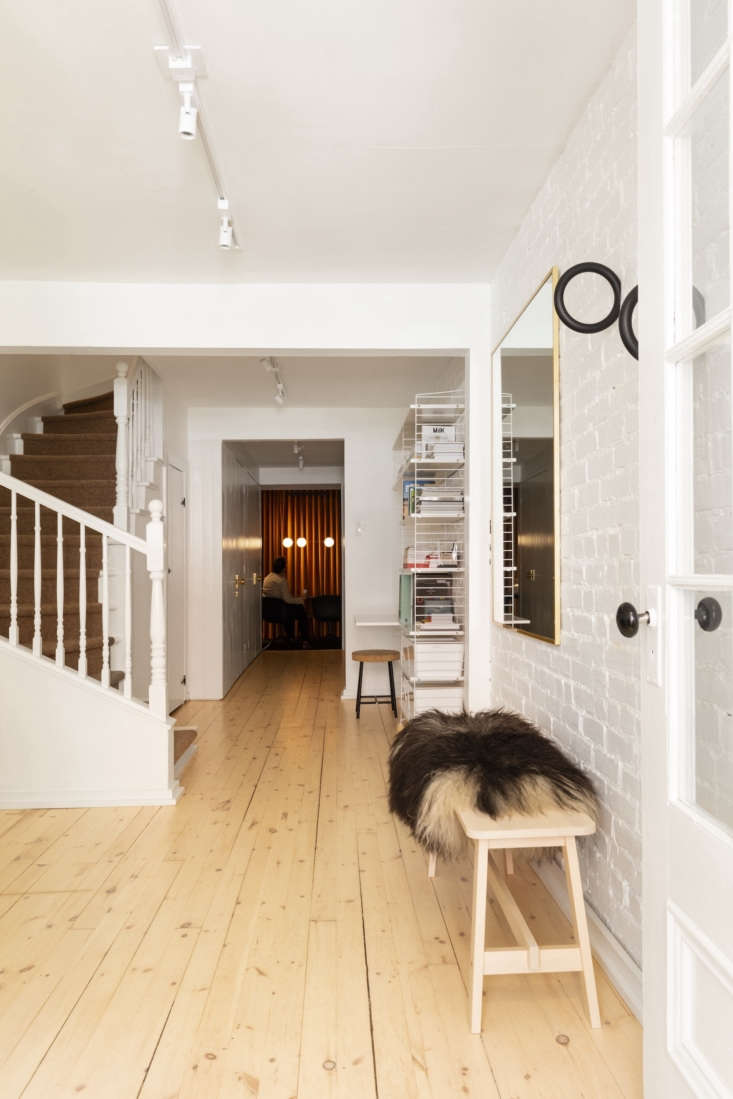 Above: The front door leads to the ground floor, which Michael has turned into his dedicated design studio. “We didn’t want to have the feeling of living in an office, and we also we didn’t want the client to have the impression of being in our home,” he explains of their decision to silo the office to this floor. Two black Gym Hooks by Hay hang at the ready for coat storage. 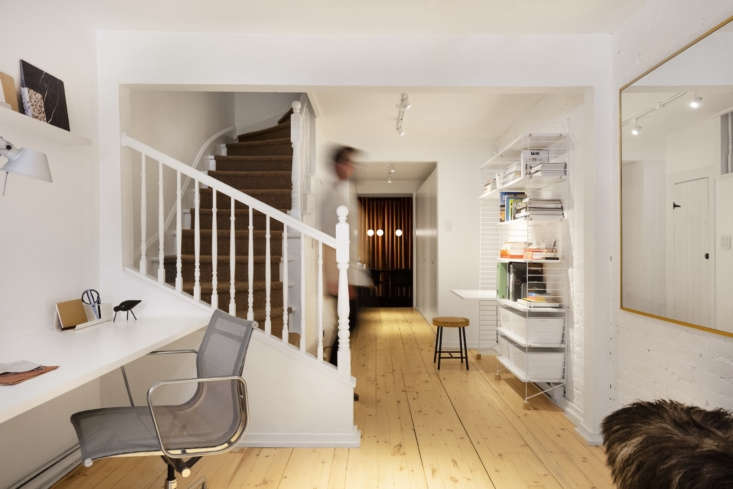 Above: The staircase is original to the 1885 house. The couple added a carpet runner in lambswool. The main work area is to the left. The shelving and desk unit on the right is additional work space for colleagues that occasionally drop in to collaborate. 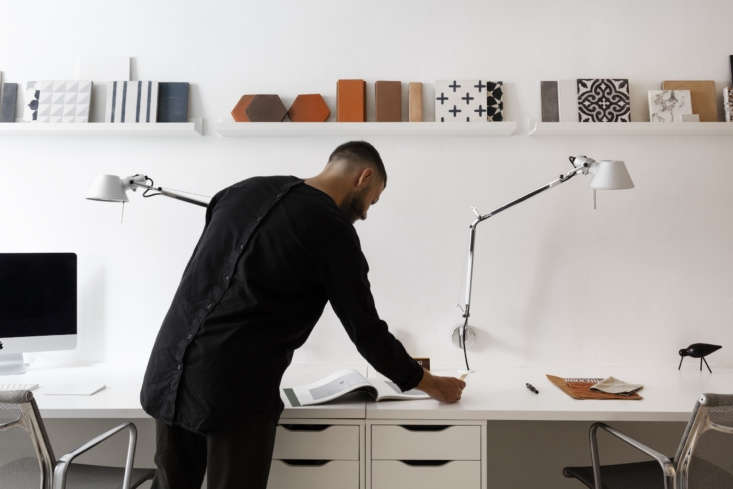 Above: Michael in front of simple built-in desks and a display of tile samples. Under the desk are two from Ikea. 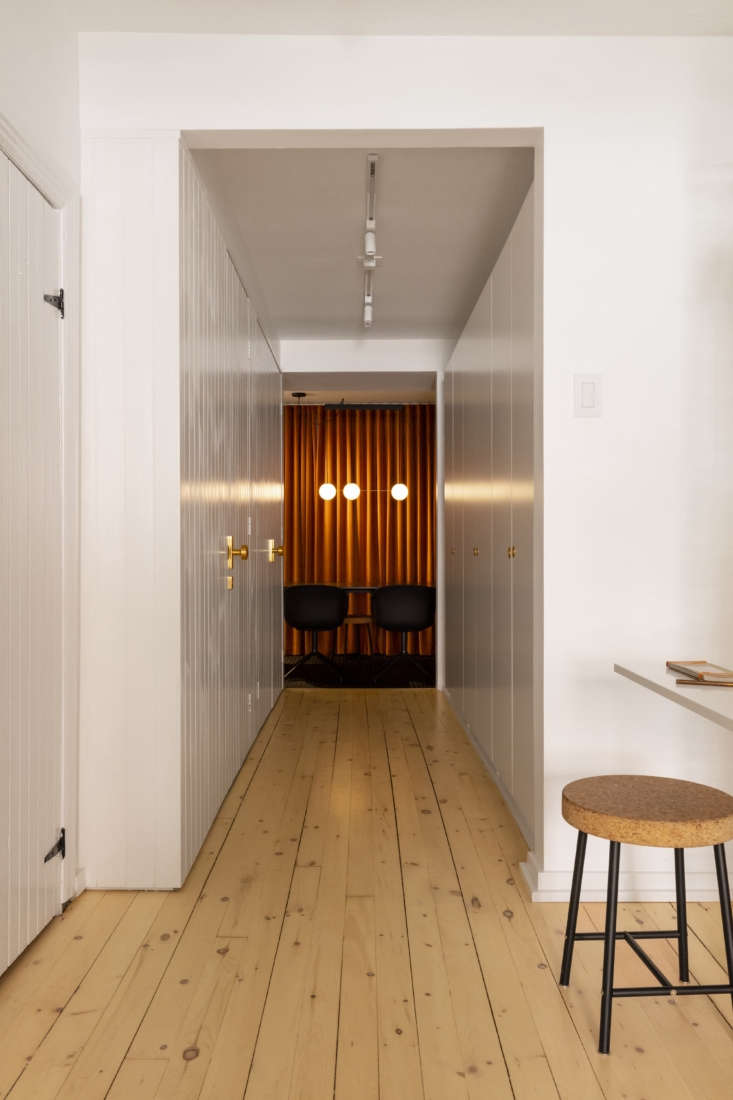 Above: Another Ikea find: the Sinnerlig cork stool designed by Ilse Crawford, now discontinued. Michael decided to turn the middle, window-less portion of the floor over to storage and utility closets and a powder room. 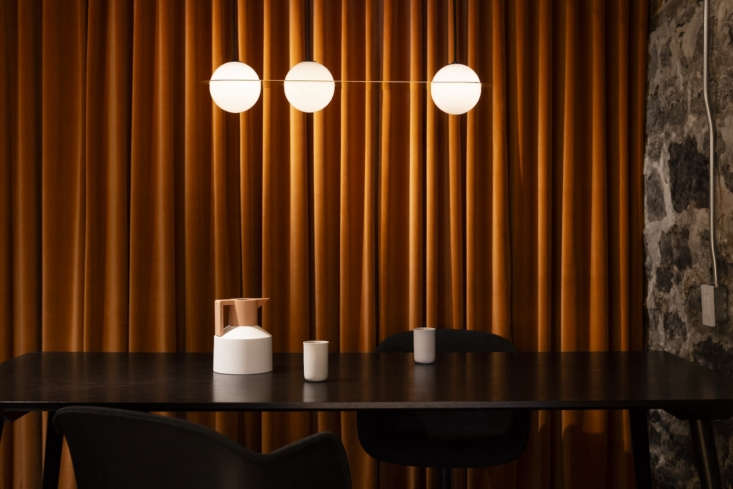 Above: On the other end of the floor is a conference room for visiting clients. Michael added orange velvet drapery for a “speakeasy atmosphere.” 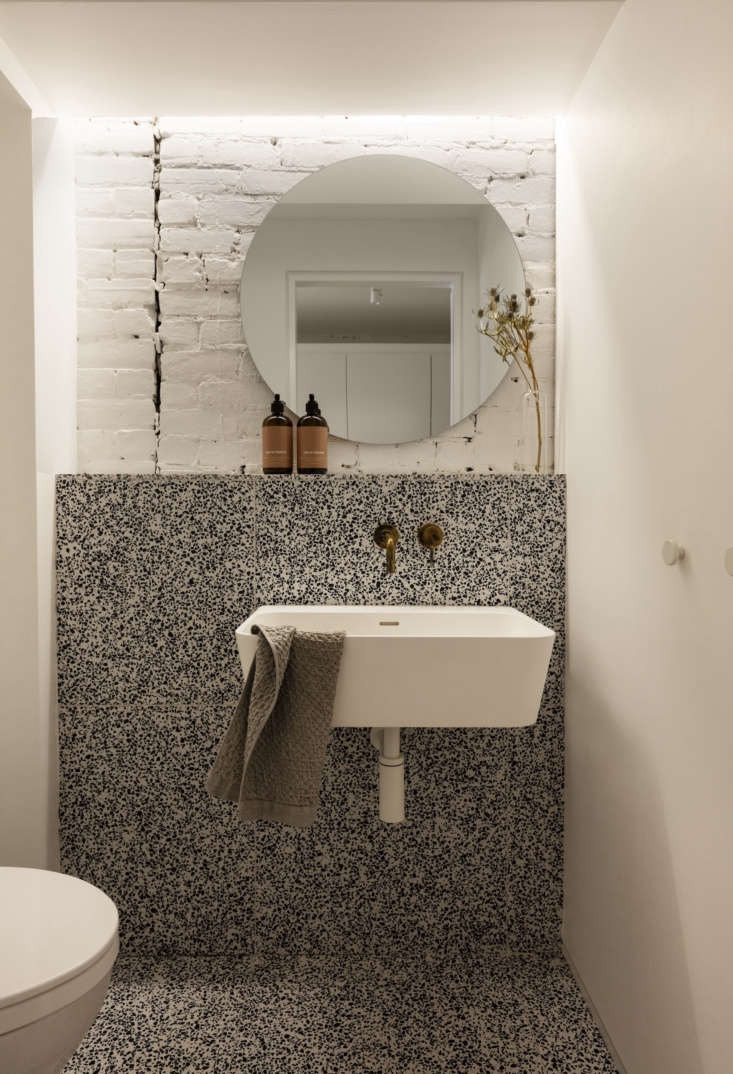 Above: The terrazzo powder room, featuring a sink from . 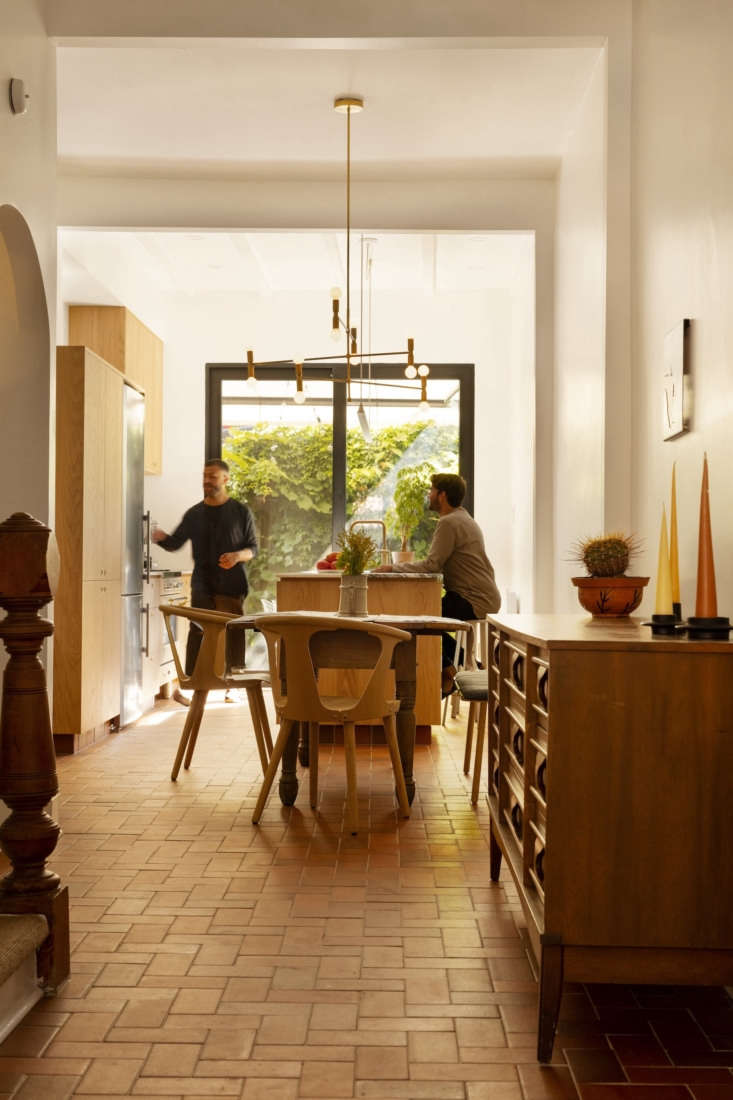 Above: The kitchen, dining, and living rooms comprise the second floor. The terracotta tiled floors are new but replicate the original flooring in the kitchen. 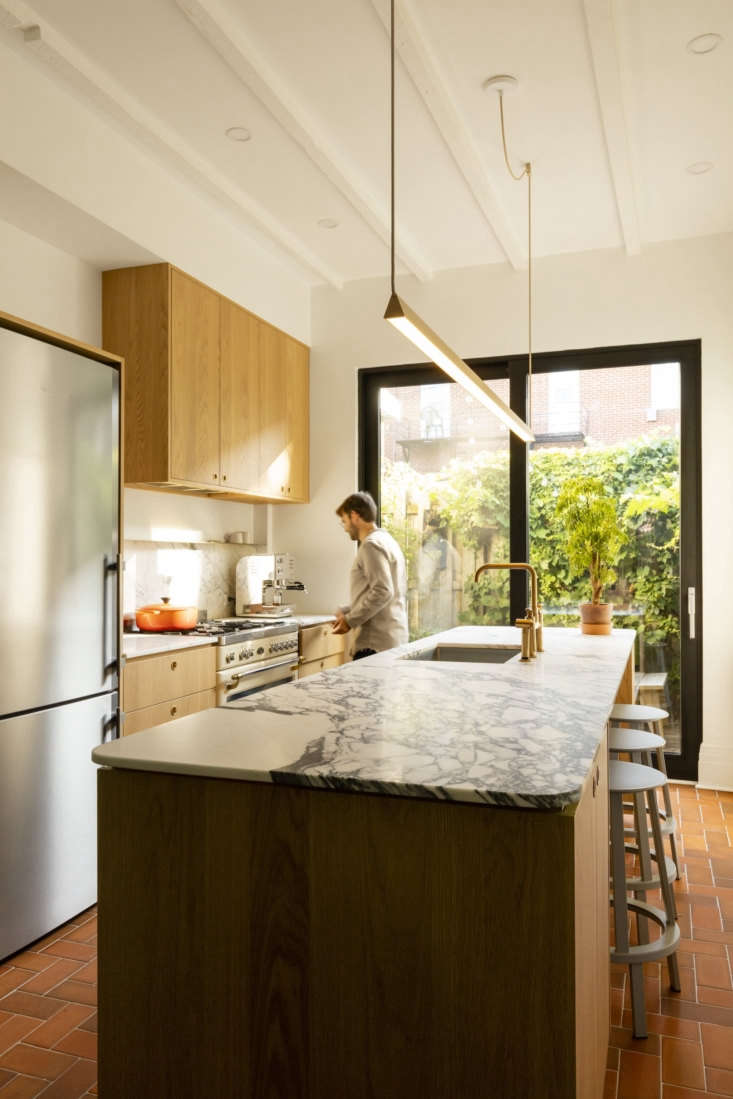 Above: Just off the kitchen is the couple’s lush courtyard. Calacatta arabescato marble was chosen for its dramatic dark gray veining. The suspension light is by ; the stools are from . 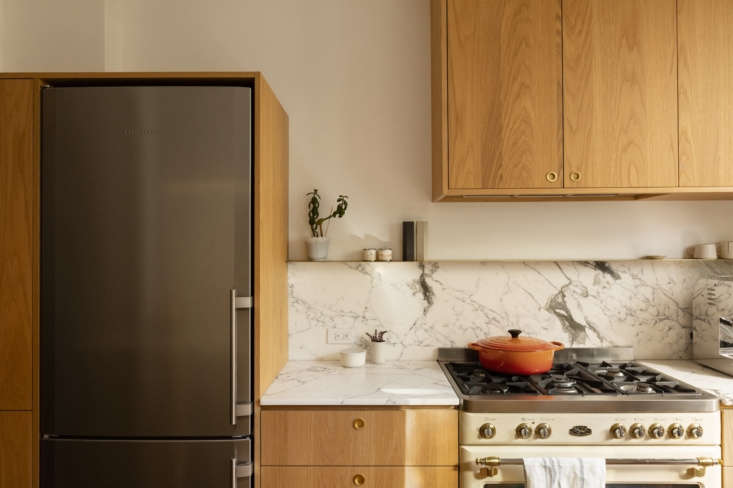 Above: The custom oak cabinetry is by . A slim shelf rests above the backsplash. 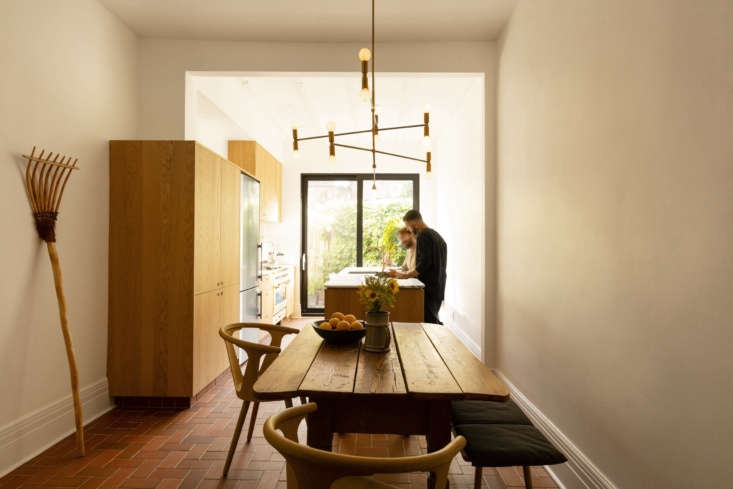 Above: The couple furnished their home with a mix of vintage finds, new modern pieces, and family heirlooms, including the dining table and the rake, both from Mathieu’s side of the family. “His mother and father where living in Iraq for a time. They used it to scrape the sand,” says Michael of the rake. 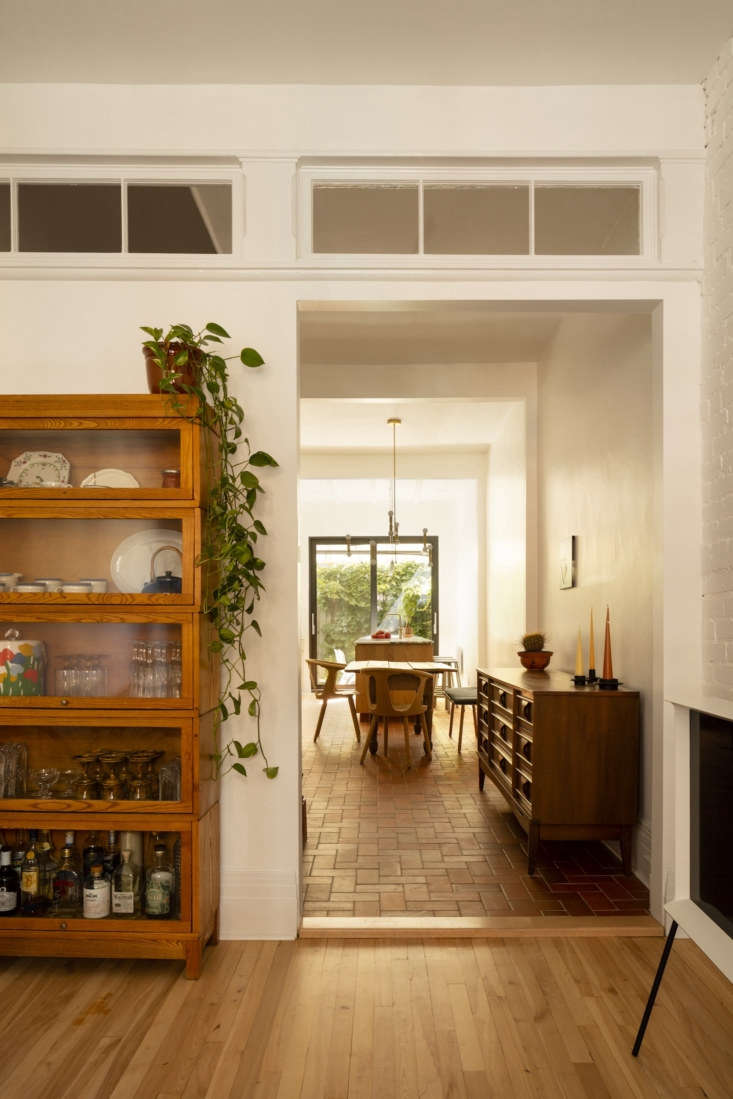 Above: The long view, from the living room, toward the dining room, into the kitchen. 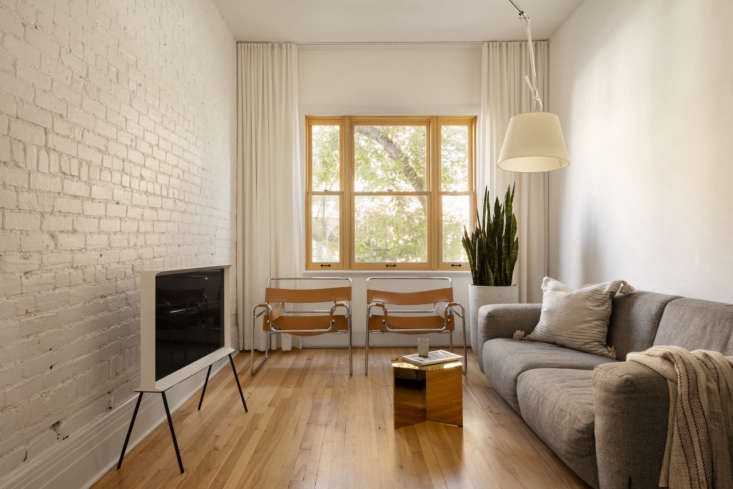 Above: The simple living room, with a by the Bouroullec brothers for Samsung. The couple chose Sherwin Williams’ for the walls throughout the home. The wood floors are original; they were simply sanded and treated with a matte varnish. 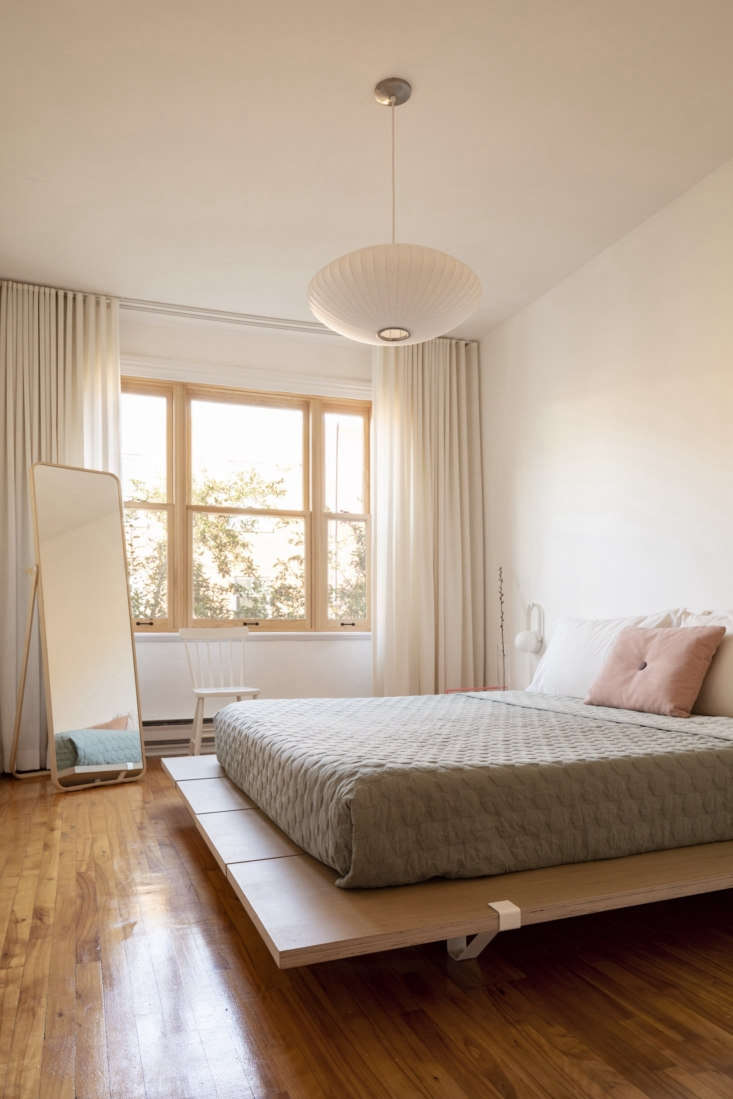 Above: The third floor has two bedrooms. Here, simplicity abounds. A Nelson bubble lamp hangs above a platform bed from . The mirror is from . 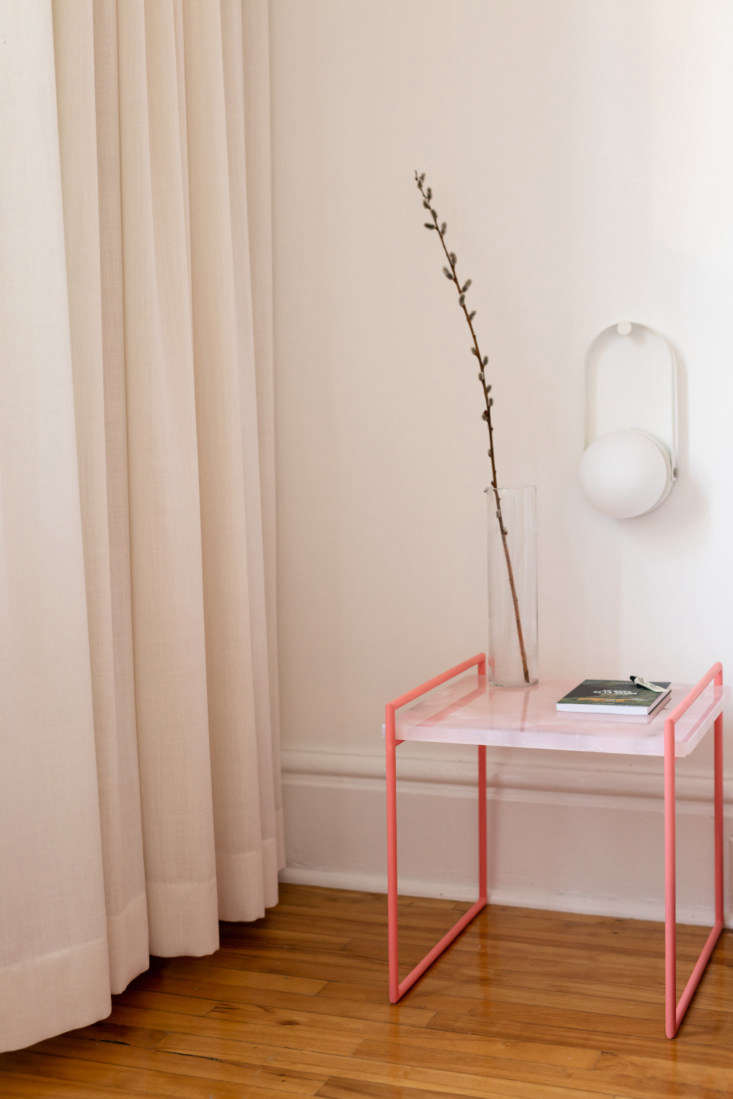 Above: “The pink side table is custom-made for our small collection of furniture that we sell,” says Michael. A C by Norm Architects is cleverly used as a sconce here.