Rajesh Tailang has been working in the industry since 1994. If you have seen Mandira Bedi’s Shanti, you'd know that he was part of the daily soap but things changed for the actor when his 2014 film Siddharth gave him the much-needed acclaim. He was nominated for the Best Actor award at the 2nd Canadian Screen Awards and the movie won the Best Film Award at the Beijing Film Festival.

He went on to star in a number of projects like Omerta, Mukkabaaz, Haseena Parkar, Aiyaary, Selection Day, Commando 3, Panga, and Bandish Bandits. But it was with and International Emmy award winner Delhi Crime that he made a mark and people started to notice him.

Just recently, he shared a picture on Twitter that has been doing the rounds and people are stunned after seeing him this way. He shared a picture wherein he is seen selling Ram Laddu and blamed it on the lockdown as the entertainment industry is completely put on a halt and has been severely affected by the deadly pandemic. 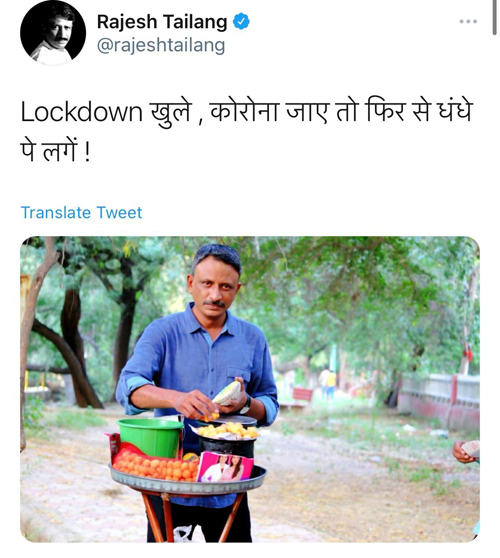 There have been multiple reports of many actors struggling to make ends meet because of the lockdown. But, there’s a twist in this case.

A few media outlets carried the story and said that he had been affected because of the pandemic but it was nothing but a picture from a shoot probably. Rajesh even took a dig at the entire scenario and said that people on Twitter understood the humour but Indian media failed terribly. 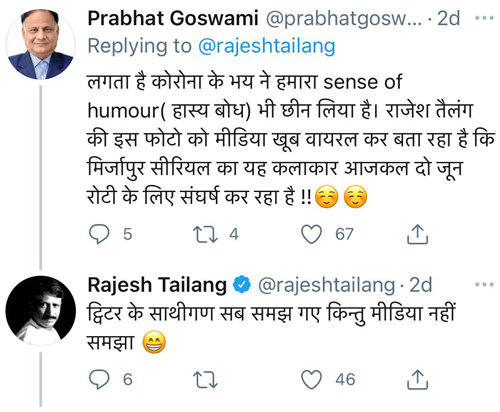 Talking about the success of Mirzapur, in an interview with Firstpost, he said it took almost 25 years of work to get noticed but he thinks that it wasn’t a significant role compared to others that he has done so far but as the show was a hit, people noticed him.

He said, “Mirzapur, surely. I didn't know it would become so popular. 50 out of 100 people, who meet me today refer to me as 'Panditji'. Even though I have almost 25 years of work behind it. Compared to my earlier works, it wasn't even a significant role in my opinion, but I guess what actors often fail to see is the context of success and failure. You could do your best work in a bad film, and it will fall through the cracks. And you do a decent part in a phenomenon like Mirzapur, and people see you as this massive success.”