This paper is equal to a complete tutorial of power mosfet,the contents include the structure, working principle,characteristics and basic working circuit of power MOSFET and how to select the right power mosfet and etc. Since the development of power MOSFET in 1976, because of the development of semiconductor technology, its performance has been improved continuously: such as high voltage power MOSFET its working voltage can reach 1000V; low conduction resistance MOSFET its resistance is only lOm omega; working frequency range from DC to MHz; protection measures are more and more perfect; and develop a variety of patch type. Power MOSFET (such as Siliconix recently developed thickness of 1.5mm "Little Foot series"). In addition, the price is also decreasing, making the application more and more extensive, and many places are replacing bipolar transistors. Power MOSFET is mainly used in computer peripherals (soft and hard drives, printers, drafting machines), power supply (AC / DC converter, DC / DC converter), automotive electronics, audio circuits and instruments, instruments and other fields.Bases on the questions that more users asked me is about mosfet basics,power mosfet basics,IGBT basics,after I updated the article "",I decided to make a series of mosfet to provide users more valuable knowledge.This article is about power mosfet.Mosfet： MOS( Metal Oxide Semiconductor),FET (Field Effect Transistor), means that mosfet is to control semiconductor(S) field-effect transistor based on the effect of electric field across the oxide layer(O) of the metal layer(M) gate.Power Mosfet： Power field effect transistors （ short for : POWER MOSFET) are also divided into two types: Junction Field Effect Transistor and Insulated Gate Field Effect Transistor, but usually mainly refer to the MOS (Metal Oxide Semiconductor FET) in the insulated gate type. Junction type power field effect transistor is generally called Static Induction Transistor (SIT).Its characteristic is that the gate voltage is used to control the leakage current, the driving circuit is simple, the driving power is small, the switching speed is fast, the working frequency is high, the thermal stability is better than GTR, but its current capacity is small and the voltage is low, and it is generally only suitable for power electronic devices with no more than 10kW power. Please video the following video to help you learn power mosfey more intuitively:


Tutorial on MOSFETs
The type of power MOSFET: according to the conductive channel, it can be divided into P channel and N channel. When the gate voltage is zero, there is a conductive channel and an enhanced type. For N (P) channel devices, the gate voltage is greater than (less than) zero, and the power MOSFET is mainly the N channel enhancement.Enhancement type: Normally switched “off” 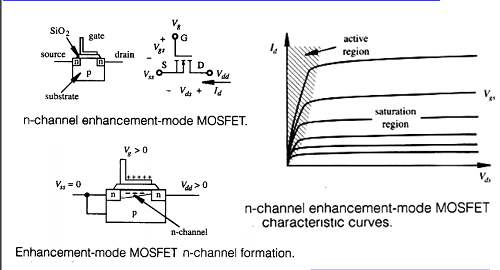