How to Find The Key Of A Song

When you’re playing music, whether you are alone or with other musicians, knowing in what key you are is essential at all times. If you aren’t sure of which key a given song is, it might lead you to an awkward situation when it is your turn to play a solo!

There are songs that stay within the same key all the time, and others, such as most jazz standards, might modulate to different keys throughout the music, which makes it absolutely necessary to be able to figure this out easily.

What is a song’s key?

The key of a song is the tonal center of the music. In other words, it is the chord which a piece of music revolves around. It can also be called the “I chord”, in roman numerals, or the tonic chord.

For instance, if you’re told that the song you’re about to learn is played in the key of C Major, that means that the main notes that will form the melody and the chords of that song belong to the C Major scale.

This doesn’t mean that there can’t be other notes of chords, but the main structure and elements will be defined by the key of the song.

In short, the tonic is what feels as if you’ve landed “home”, you feel the release of tension and a sense of stability when you come back to the I chord.

How to quickly figure out a song’s key?

Many songs start and/or end with this “I chord”, or the tonic, but this isn’t a rule of any kind, although it happens most of the times.

With this in mind, you can listen for the chord in which a song ends, and many times, that chord is the key of the song.

Many songs also start on the IV degree, and they might end on a chord which isn’t the tonic, there’s nothing wrong with that.

A couple of very easy examples that allow you to hear this clearly are the following songs:

Songs like the second example are the reason why this method does not work 100% of the times, but if you train your ear enough, you’ll easily realize when the ending chord does not correspond to the key of the song!

The key signature can let you know in which key a piece of music has been written in very easily, you only need to understand a couple of basic concepts.

It is comprised of a number of sharps or flats that are placed just before the time signature of the composition. These must be placed in a specific order, and they are what allows you to transform a tune in C Major (no sharps or flats) into something else such as G Major (1 sharp).

The order in which these accidentals must be placed follows the circle of fifths, which you can see in the image below: 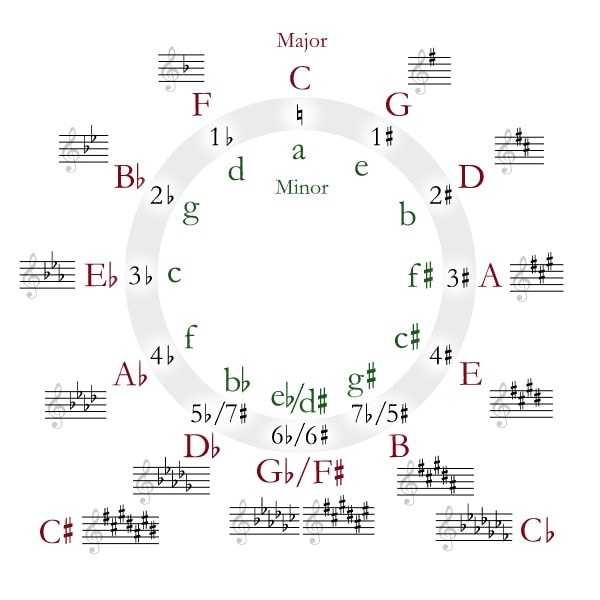 Here’s how this works:

You should have your own copy of the circle of fifths until you have interiorized it, it is useful for lots of exercises too.

Now that you know how it works, if you notice that the sheet music for a certain tune has only one sharp in its key signature (as shown below), you immediately know that it will either be in G Major or in E minor (its relative minor key). 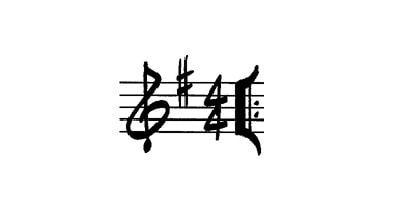 Determining the key of a song by analyzing its chords

If you’re learning a song by ear, you won’t have the sheet music telling you in which key it has been written in. Maybe you already have a chord chart available, and this is also a valid way to figure out the key, as long as you understand the basics of harmony.

If you know how to tell which chords fit into a certain key, by looking at the chords of a certain song, you can easily deduce the key of the song. Below, you’ll find the chord chart for C Major, with the chord degrees and the corresponding chords.

There is something that you absolutely must know by heart. In a Major key:

This is valid for triads, if you do the same with seventh chords, there will be some slight differences.

Let’s imagine you find the chord chart to the song you want to learn, but you haven’t been able to figure out the key just by listening to it and trying to identify that “I chord”.

If you notice that the chords D minor and E minor are present, that would be a potential indicator that we’re in C Major, as those would be the II and III chords.

Identifying F and G Major is also a way to realize we’re likely in C Major, as those would be the IV and V chords. If we were in G Major, for instance, F would have to be F diminished and not Major.

If the song is in a minor key, the chord chart is the same, but it would begin on the 6th degree of its relative major key.

For example, for C Major’s relative key (A minor), the chords are the following:

As you can see, knowing a lot of music theory isn’t an essential part of being able to figure out the key of a song, although it might help in some cases, when you don’t have all of the resources that could better inform you.

The most important thing is that you keep training your ears whenever you can, and at a certain point, a task like this will become second nature to you!