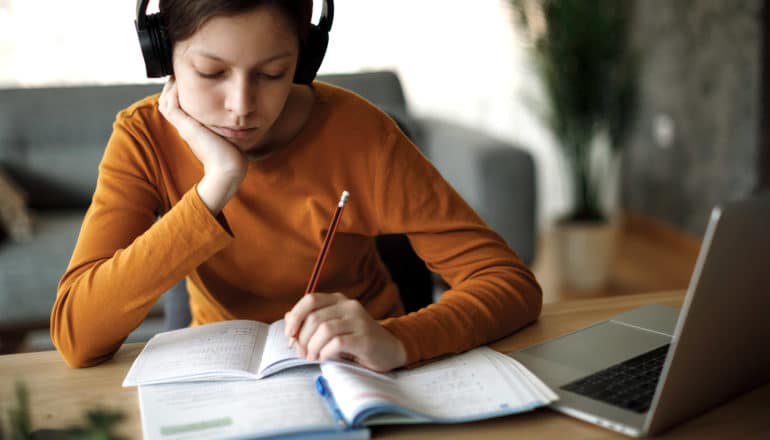 High school students who attended school remotely during the pandemic reported lower levels of social, emotional, and academic well-being, according to a new study.

The findings held even when researchers accounted for factors like gender, race and ethnicity, and socioeconomic status.

For the study, published in , researchers looked at data from more than 6,500 students in grades 9 through 12, some of whom attended virtual school full-time and others who attended in person, to better understand how last year’s remote learning—mandated by many districts—influenced students.

“Teenagers would really prefer to be with each other and with adults like their teachers, not home with mom and dad.”

“There is a thriving gap,” says Angela Duckworth, professor of psychology at the University of Pennsylvania and a founder of the nonprofit .

“On every measure tested we saw a difference favoring kids who were in-person versus learning at home and therefore, alone. We’re inferring from this that, all things being equal, would really prefer to be with each other and with adults like their teachers, not home with mom and dad.”

Collecting these data began long before the pandemic, through the Character Lab Research Network. Three times a year, participants complete a Student Thriving Index, which asks them to rate facets of their well-being, including how well they think they fit in, whether there’s a trustworthy adult at school, how happy or sad they feel, and how interesting they find their classes.

“It’s a way of taking the pulse on how students are feeling,” Duckworth says. “As researchers, we’ve realized there’s only one way to truly know how teenagers are doing, and that’s to ask them.”

Student participants had completed a survey in February 2020, which the researchers used as a pre-pandemic baseline. The following survey took place in October; at that time 4,202 students were attending school remotely and 2,374 students were going in person. Because Duckworth and colleagues hadn’t randomly assigned participants into these groups, they made sure to control for whatever variables they could.

For 10th, 11th, and 12th graders, the findings were clear: Those on Zoom school struggled more than their peers taking classes in person. But for 9th graders, the divide between groups was much smaller. The researchers had a few guesses why.

“Maybe 9th graders had never experienced high school before, so their pandemic fall semester wasn’t as influenced,” Duckworth says. “But I think a different explanation, and one that makes sense to us as developmental psychologists, is that the older you are the more you want to be independent. You want to separate from your parents. The period of adolescence is when you transition from being a dependent child to an independent adult.”

During the pandemic, researchers have paid a great deal of attention to young children, and rightly so, Duckworth says. But to her, this work shows the importance of closely watching what’s happening to teenagers, too. Their social and emotional should be part of the calculus when school districts determine and implement remote-schooling policies for the upcoming year, she says.

Like much about the pandemic, it’s hard to say whether acute blips like this will become long-term challenges for teenagers. Duckworth expects most young people will bounce back.

“It would be consistent with what we know about adolescent development,” she says. “The most common response to adversity is . It’s the rule, not the exception.” She and colleagues will continue collecting data to test that hypothesis and many others.

Additional coauthors are from the Character Lab, the organization Mathematica, and Temple University. The John Templeton Foundation and the Walton Family Foundation funded the work.