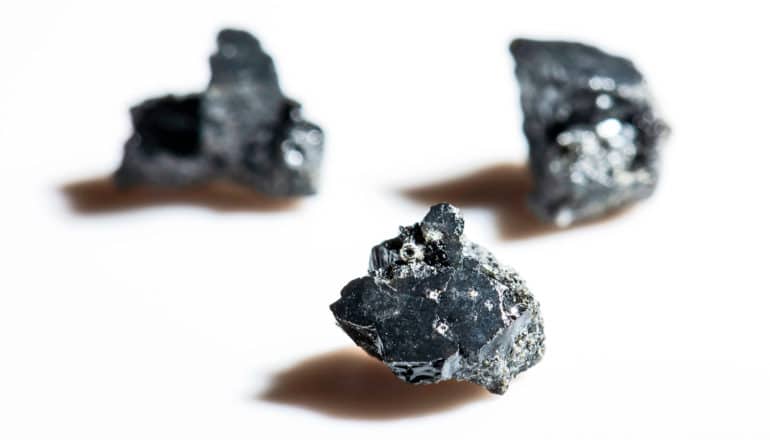 A new study contradicts longstanding assumptions about whether Earth’s moon ever had a magnetic shield.

In 2024, a new age of space exploration will begin when NASA sends astronauts to the moon as part of their Artemis mission, a follow-up to the of the 1960s and 1970s.

Some of the biggest questions that scientists hope to explore include determining what resources are found in the moon’s soil and how those resources might be used to sustain life.

In a paper in the journal , researchers report their findings on a major factor that influences the types of resources that may be found on the moon: whether or not the moon has had a long-lived magnetic shield at any point in its 4.53 billion-year history.

The presence or absence of a shield matters because magnetic shields protect astronomical bodies from harmful solar radiation.

“This is a new paradigm for the lunar magnetic field,” says first author John Tarduno, professor of geophysics in the earth and environmental sciences department at the University of Rochester.

For years, Tarduno has been a leader in the field of paleomagnetism, studying the development of Earth’s magnetic shield as a means to understanding planetary evolution and environmental change.

originates deep within the planet’s core. There, swirling liquid iron generates electric currents, driving a phenomenon called the geodynamo, which produces the shield. The magnetic shield is invisible, but researchers have long recognized that it is vital for life on Earth’s surface because it protects our planet from solar wind—streams of radiation from the sun.

But has Earth’s moon ever had a magnetic shield?

While the moon has no magnetic shield now, there has been debate over whether or not the moon may have had a prolonged at some point in its history.

“Since the Apollo missions, there has been this idea that the moon had a magnetic field that was as strong or even stronger than Earth’s magnetic field at around 3.7 billion years ago,” Tarduno says.

Scientists based the belief that the moon had a magnetic shield on an initial dataset from the 1970s that included analyses of samples collected during the Apollo missions. The analyses showed that the samples had magnetization, which researchers believed was caused by the presence of a geodynamo.

But a couple of factors have since given researchers pause.

“The core of the moon is really small and it would be hard to actually drive that kind of magnetic field,” Tarduno explains. “Plus, the previous measurements that record a high magnetic field were not conducted using heating experiments. They used other techniques that may not accurately record the magnetic field.”

Tarduno and his colleagues tested glass samples gathered on previous Apollo missions, but used CO2 lasers to heat the lunar samples for a short amount of time, a method that allowed them to avoid altering the samples. They then used highly sensitive superconducting magnetometers to more accurately measure the samples’ magnetic signals.

“One of the issues with lunar samples has been that the magnetic carriers in them are quite susceptible to alteration,” Tarduno says. “By heating with a laser, there is no evidence of alteration in our measurements, so we can avoid the problems people may have had in the past.”

Other samples they analyzed had the potential to show strong magnetization in the presence of a magnetic field, but didn’t show any magnetization, further indicating that the moon has never had a prolonged magnetic shield.

“If there had been a magnetic field on the moon, the samples we studied should all have acquired magnetization, but they haven’t,” Tarduno says. “That’s pretty conclusive that the moon didn’t have a long-lasting dynamo field.”

Without the protection of a magnetic shield, the moon was susceptible to solar wind, which may have caused a variety of volatiles—chemical elements and compounds that can be easily evaporated—to become implanted in the lunar soil. These volatiles may include carbon, hydrogen, water, and helium 3, an isotope of helium that is not present in abundance on Earth.

“Our data indicates we should be looking at the high end of estimates of helium 3 because a lack of magnetic shield means more reaches the lunar surface, resulting in much deeper reservoirs of helium 3 than people thought previously,” Tarduno says.

The research may help inform a new wave of lunar experiments based on data that will be gathered by the Artemis mission. Data from samples gathered during the mission will allow scientists and engineers to study the presence of volatiles and better determine if these materials can be extracted for human use. Helium 3, for instance, is currently used in medical imaging and cryogenics and is a possible future fuel source.

A lack of magnetic shielding also means that ancient lunar soils may hold records of past solar wind emissions. Analyzing cores of soil samples could therefore provide scientists with a better understanding of the evolution of the sun.

“With the background provided by our research, scientists can more properly think about the next set of lunar experiments to perform,” Tarduno says. “These experiments may focus on current lunar resources and how we could use them and also on the historical record of what is trapped in the lunar soil.”