Tony Hale on The Mysterious Benedict Society and the MCU

In the Disney+ original series , adapted from the book of the same name by Trenton Lee Stewart, a global crisis known as The Emergency pushes Mr. Benedict (Tony Hale) to recruit four very gifted kids for a dangerous mission to infiltrate The Institute, a school run by the nefarious Mr. Curtain (also Hale). To save the world, the kids must devise a plan to discover the truth and defeat evil, in order to set things right again.


During this 1-on-1 interview with Collider, Hale talked about how excited he was to tackle playing twins, why he loves this world, how much respect he has for his young co-stars, the fun of working with co-star Kristen Schaal (who plays Number Two), and that he’s hoping to continue telling this story. He also talked about whether he really knew anything about his Veep co-star Julia Louis-Dreyfus joining the Marvel Universe, and whether that’s something he’d be game to do himself.


Collider: When this came your way, did you know, from the very first moment of hearing about it, that it would give you this opportunity to play twins, and what was your reaction to that?


TONY HALE: Honestly, I remember when they offered it, or they brought it to my attention, I had not read the series, so I dove into that a little bit and saw how beautiful this world was that Trenton [Lee Stewart] created. At first, I was excited about playing twins because I’d never done that. And then, when the pandemic hit, the purpose for doing it got bigger. When the series starts, this thing called The Emergency is happening. It’s a global crisis and sends everybody into this state of panic and fear. And then, my character, Mr. Benedict, gets these four really gifted kids together to find the source. I love it because these kids don’t have crazy magical powers. Their superpower is their intellect, their creativity, and their empathy. And after the year we’ve had, those are superpowers. That is what’s gonna bring change. There’s been so much noise and so much confusion this past year that it was really hard to not find a parallel, when I was doing this, of the power of those three traits. It added a whole new thing for me.


You’re playing two characters, so how did you want to approach making them their own beings? Were there things that you specifically wanted to do, or were things that really helped you, in establishing the two different characters?


HALE: Yeah. With any character I do, I try to find elements of myself in them because if I don’t do that, then I feel like I’ll just be playing an idea of a character rather than the humanity of it. Then, I would fall into the trap of being like, “All right, here’s the good guy and here’s the villain.” With Benedict, I consider myself, hopefully, an encouraging person and positive, and Benedict carries those traits. And then, Curtain is very sarcastic, which I resonate with. Also, he feels very misunderstood, and I’ve had moments of that in my life. You have to find those places of resonance, in order to bring an authentic picture. 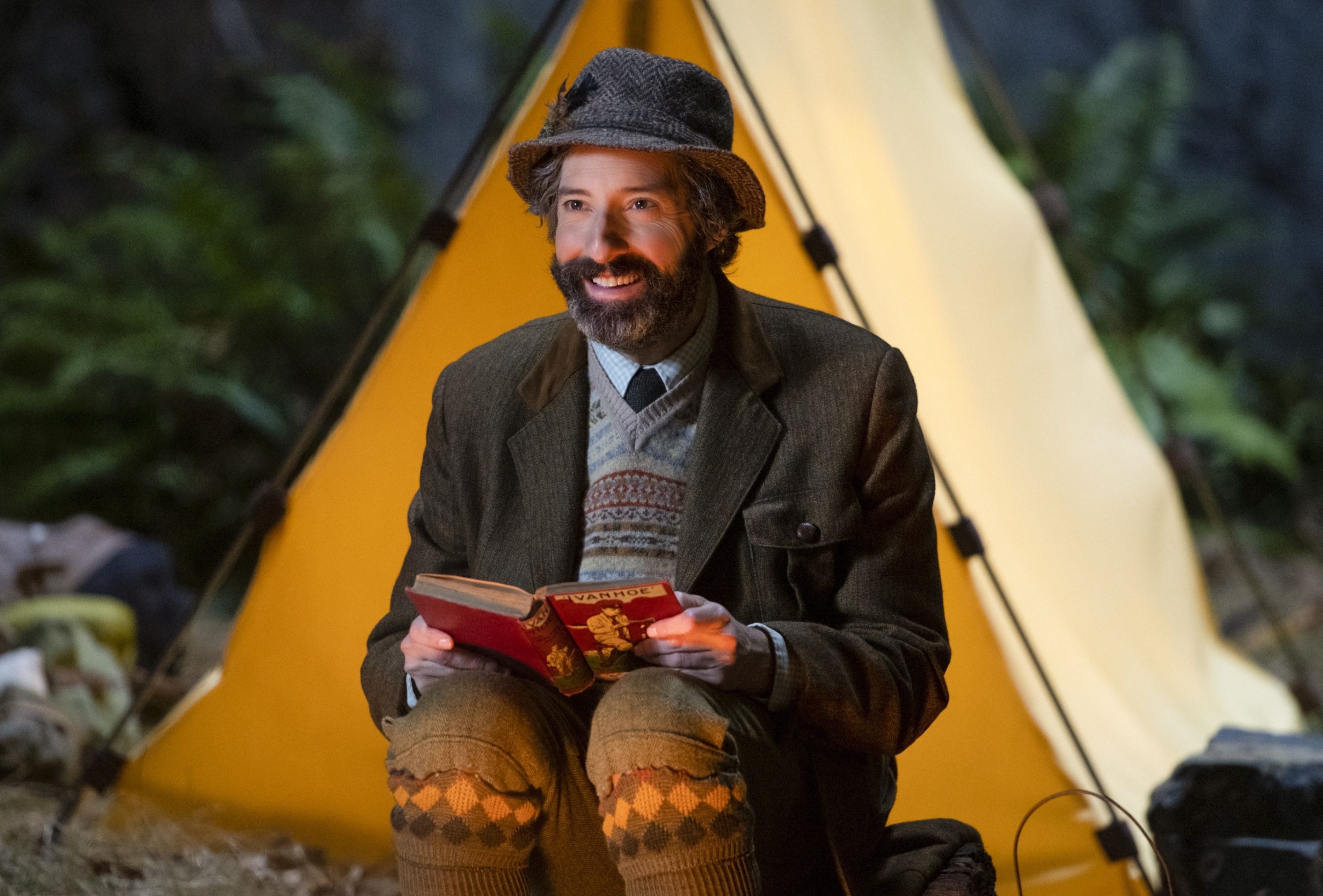 I’ll never forget that when David Lynch was doing the original Twin Peaks series, he had two separate trailers, one of which said David Lynch: The Director and the other said David Lynch: The Actor. To play twins on this, did you ever consider insisting on having a trailer for each character? Was that something that ever occurred to you?


HALE: I mean, good for David Lynch. I don’t know if I could do that because I’d be so worried about the perception. It would be like, “Okay, here comes d-bag Tony, with two trailers.” But good on David. That’s a level of entrance into the characters that maybe I should have gotten to, but I didn’t get there.


It feels like it would be very appropriate to get into the headspace of Curtain.


HALE: Oh, totally. I did not mean to just call David Lynch a d-bag. I did not mean that. But I will say that, honestly, I feel like the actors are a very small piece of this pie. With make-up, wardrobe, hair, production design, lighting, there were a ton of artists that really fill out this pie. When you were talking about the trailers, it made me think about how, when I walked into Curtain’s office, it was in blues, it was very cold and stoic, and the furniture was uncomfortable. And then, Benedict’s office was very warm, in greens and browns, and was cozy and comfortable. And then, you put the wardrobe on and you can’t help but enter into these characters’ personas. It was really instinctual.


Do you ever feel like you’re having your own existential crisis, much like your Toy Story 4 character Forky has, when you’re playing the cause of the negativity that you’re also trying to stop?


HALE: Actually, more than that, the existential part came from shooting a show about the noise in the world and trying to find voices of hope and empathy, amidst a pandemic and the confusion that was going on, and everybody just clinging for voices of truth and hope. That’s probably where the existential thing was happening. The parallel that was going on between the two was pretty wild. However, maybe I get a little too compassionate, to a fault, but when I was playing Curtain, when I’m in his shoes, I’m probably a little more quiet. I can separate it pretty quickly. I don’t go into too much of an existential place for the characters because then I would be worried about being institutionalized. 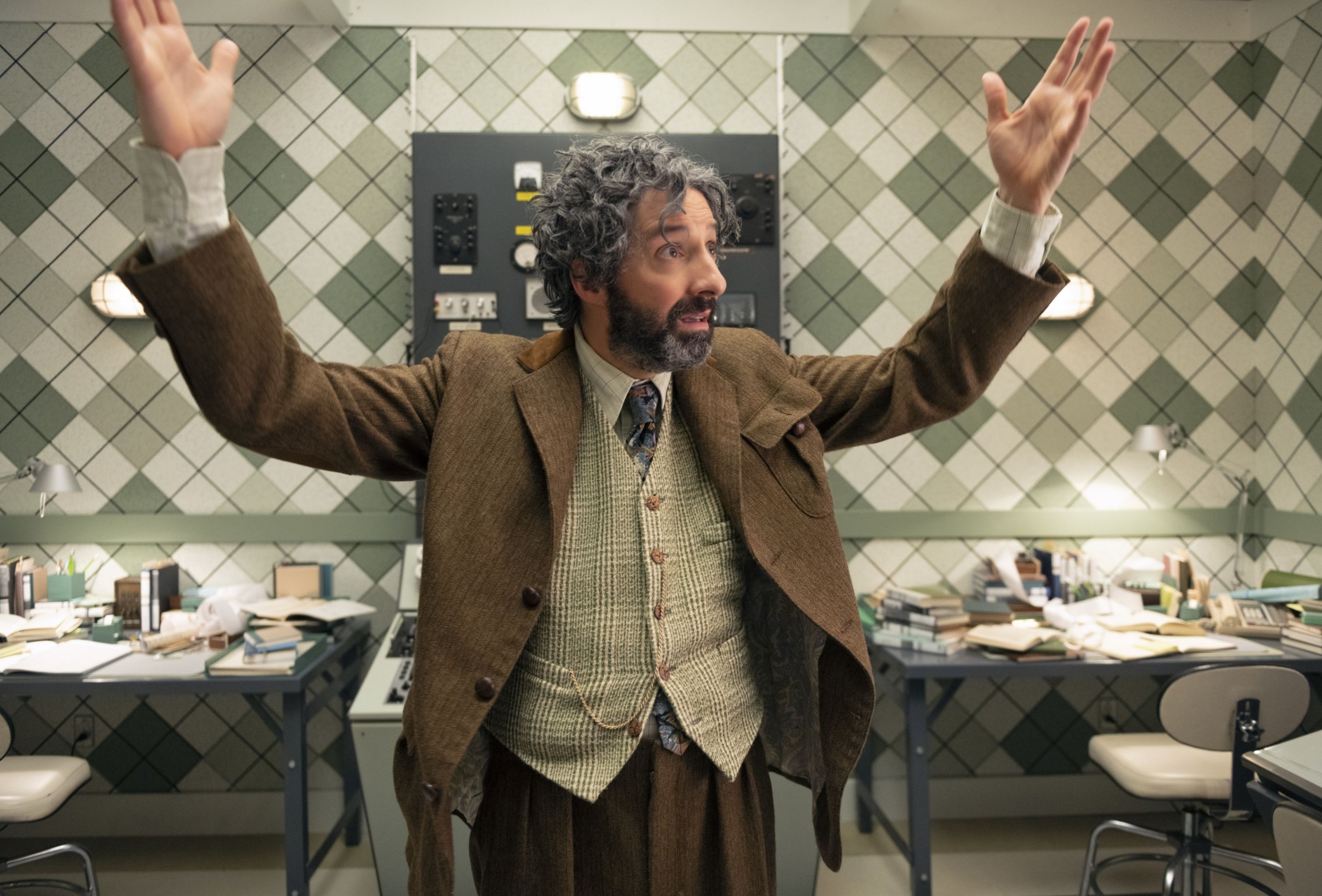 
When you’re playing a character that has bouts of narcolepsy and basically just falls over anywhere, at any time, are there ever mishaps that happen with that?


HALE: No, but how great would it be to have that excuse? Just to fall asleep during a Zoom meeting and be like, “Oh, I have narcolepsy, sorry.” Maybe it’s from having done so much comedy, and James Bobin directed the pilot. I was asking for pratfalls and he was like, “Let’s tone it down a bit, Buster Keaton.” I love the shot of talking, and then just passing out. I wanted to keep pushing it I was like, “Can I fall on the table and break the table in half?” And they were like, “No, let’s step back from that and not do that.”


I love Kristen Schaal, because how can you not love her, and I love the weird dynamic between your characters. What do you most enjoy about that relationship and getting to play with her?


HALE: First of all, I love Kristen Schaal. She’s just the absolute best. Just a little backstory, we were all shooting during the pandemic, so we couldn’t really hang out or connect outside of set because we all had to stay isolated. That was really tricky because I’m used to being on Veep, where you just crack jokes and hang out, and all of that kind of stuff. So, the time that we did spend together, when we were able to talk, it was a real gift. We knew a lot of the same people because of the comic world, so that was really nice. The thing with comedy is, when you throw the ball, you trust that the other person is gonna throw it back, so that you can have that comic catch. Anytime I’d throw something at Kristen, or she’d throw something at me, we always knew that we were gonna throw something random back, and that was really, really fun. There were also so many surprises that Ryan Hurst threw back, or MaameYaa [Boafo], and the kids were really fun. With the kids, not only is it overwhelming to sign up for a Disney show, but we were all away from our families for five months, they were shooting in a pandemic, they had to do school half the time, and over Zoom. Those kids were doing a lot and I have a lot of respect for them. They did it all with a great attitude. 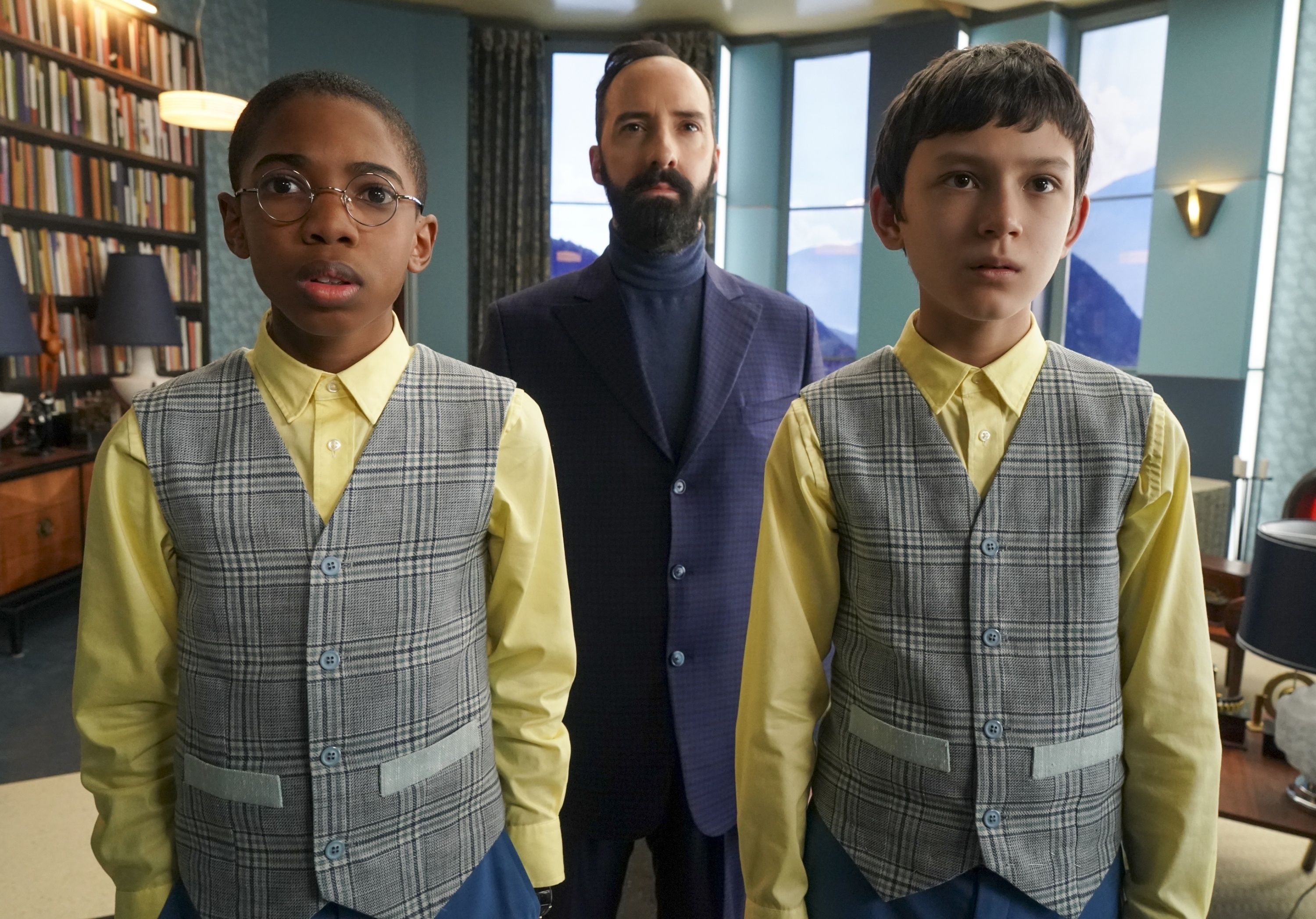 Some people have pointed to a 2019 interview, where they say you and Veep showrunner Dave Mandel almost spilled the beans about Julia Louis-Dreyfus’ Marvel appearance. Did you really know about that?


HALE: No, I didn’t. I just recently heard about this too. I need to be more in touch, but I just heard about this. I remember seeing that she was doing The Falcon and the Winter Soldier and I saw online that she was playing the villain, and I was like, “No way!” She didn’t tell me. I was just as surprised as everybody else. So, no, I did not. I am not that smart, to hide those Easter eggs in the press, but she was also very, very tight-lipped about that. I had no idea.


You’ve done so much with Disney, at this point. Would you ever want to appear in a Marvel or Star Wars series? Would you be game to play a character in one of those worlds?


HALE: Totally. I’m just seeing Captain America having this quirky guy going, “What are you doing, buddy?” Are you kidding? That’d be so fun. I don’t know how that would look, but also, put me in a suit that makes me look ripped. Let’s do that. If you can cut some fat and add some muscle with that suit, then done.


How involved do you get with the nuts and bolts of this show? Have you already had conversations about what a second season could be? Do you know how many seasons it would take to tell this story?


HALE: We haven’t really had those conversations. God willing, we get to do it again. I don’t wanna jinx it. I just try to stay present with it. But just for fun, I am reading the second book because I love Trenton Stewart and his writing, and I think it could be really fun just to see what happens next. Matt Manfredi and Phil Hay, who adapted the show, took some liberties with the first book because of COVID and some other stuff, so I know that they’d do the same with book two, but it’s fun to see the foundation that Trenton wrote.


The Mysterious Benedict Society is available to stream at Disney+. 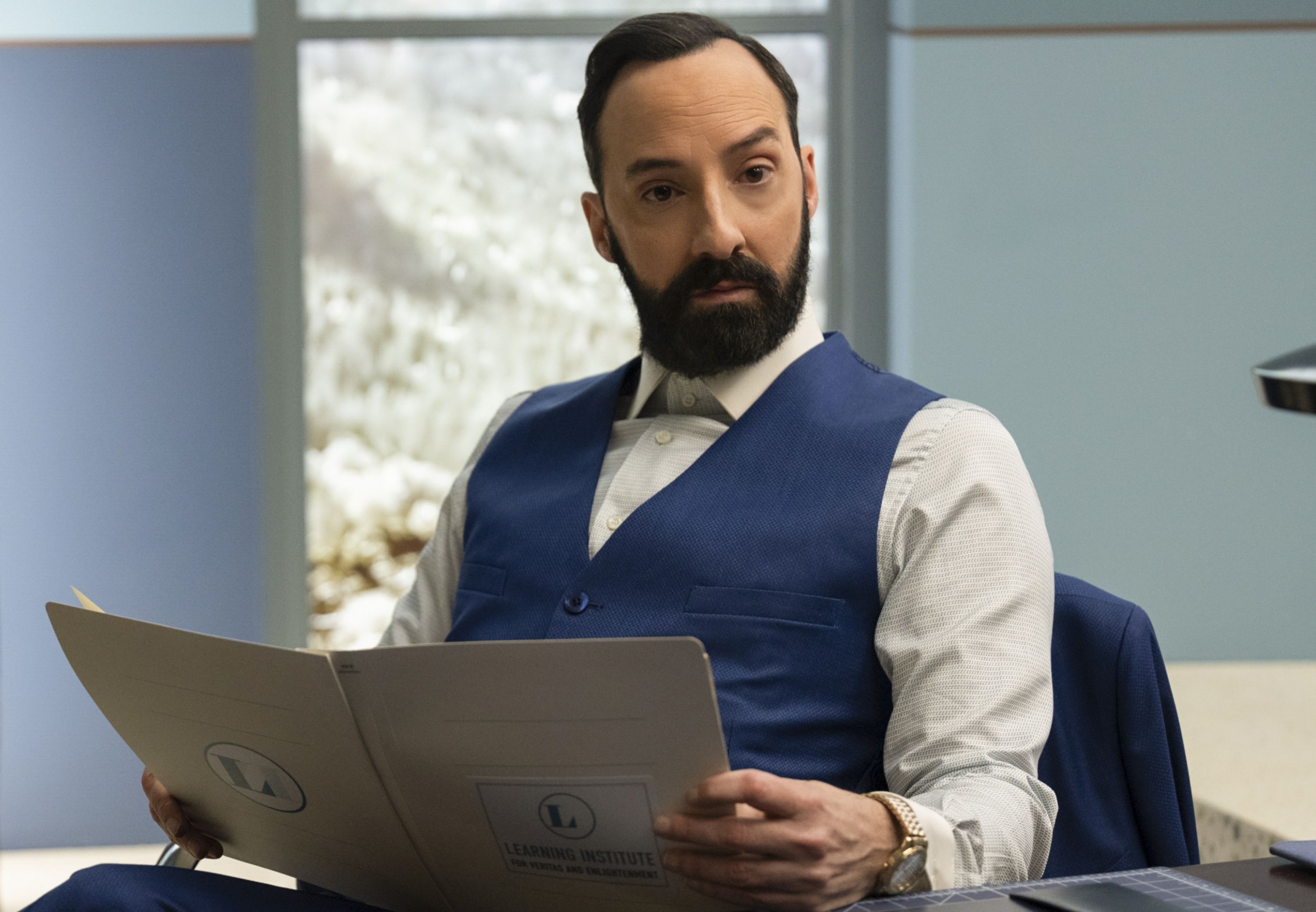