During this year's inaugural , I had a chance to play exactly 12 minutes of, you guessed it, . The new top-down perspective thriller with a top-notch cast of voice-actors hails from gaming industry veteran Luis Antonio and has the backing of perennial indie ally . So while I didn't even come close to solving the time-loop mystery of the game or exploring every end of its branching narrative during the demo, I'm thrilled to offer you this exclusive video that goes behind the scenes of Twelve Minutes' production to learn a lot more about the game.


Featuring the star-studded voice cast of James McAvoy, Daisy Ridley, and Willem Dafoe, along with creative director Antonio, the nearly 10-minute video delves into the themes of the game and reveals the particular challenges of making it. Not only was this game made while observing COVID precautions, it features a complex narrative with plenty of emotional range for its characters, which required nuanced performances from the actors to fully immerse plays into the story. But you don't have to take my word for it, you can hear from the actors themselves!


Check out our exclusive video with the cast of Twelve Minutes below, followed by our interview with Luis Antonio:


First of all, I had a chance to play a demo (for exactly 12 minutes) during Tribeca Games, and now I'm thrilled to be premiering this video, but I can't wait to get my hands on the game proper. What's it mean to you that Twelve Minutes will soon be out in the world for everyone to experience?


Luis Antonio: First of all, thanks for being interested in the experience and checking it out at Tribeca!


This whole thing started as a solo side project, and so I’ve been carrying all the nuances and variations of everything that happens in the apartment with these three characters for so long that I just can’t wait to unload it all from my brain and just ‘let it go.’


The release means that this product is finally achieving its goal, being experienced by other people, and that, for me, is quite magical! I’m genuinely curious to see how people will interpret it and if the elements I found interesting will resonate with the audience. 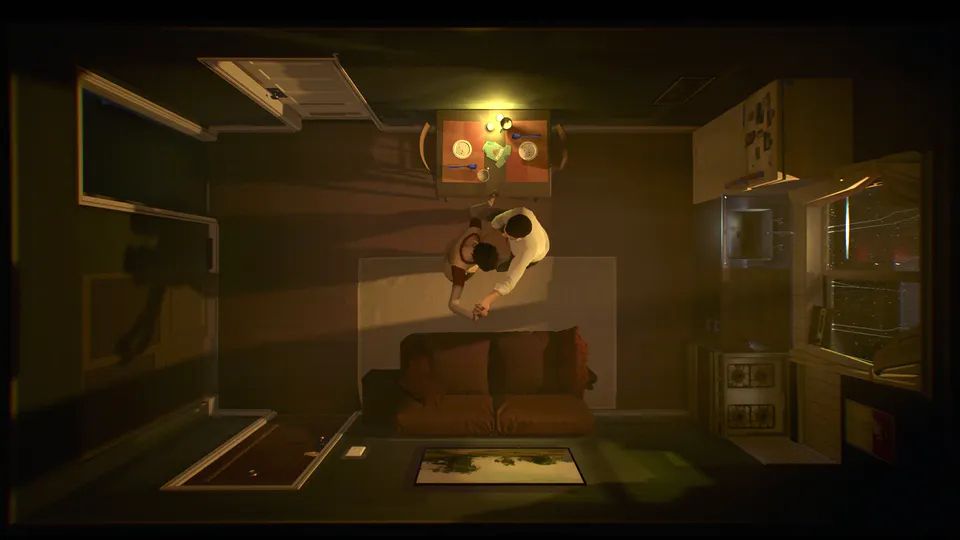 When you were in the concept stage for this game, did you ever consider going for a full-motion video, point-and-click game? Or did you always want a fully voice-acted motion-captured performance experience?


Luis Antonio: Before Twelve Minutes, I worked for over a decade as a 3D artist. From Rockstar Games to Art Director at Ubisoft and then with Jonathan Blow designing the island for The Witness. 3D art, from characters to environments, is a passion and a big chunk of my life.


So for this project, I never considered going the route of FMV, not only because it doesn’t use my skill set but also because it would not allow for the complexity and variations needed for the concept to work.


How on Earth did James McAvoy, Daisy Ridley, and Willem Dafoe come to star as your major players in this game?


Luis Antonio: When this project was still a one-person endeavor, the goal was to have dialogue balloons like Kentucky Route Zero or other similar adventure games. As it grew in visual fidelity and I partnered with Annapurna Interactive, we asked ourselves if bringing this talent would elevate the experience. Something that we knew might be feasible to achieve.


We made some tests, and we realized it not only helped reinforce the cinematic approach we’re taking with this title, but it also increases immersion and how you connect with the characters. It all hinges on the player connecting with these characters and caring about what happens to them.


We get to see some of the nuances of their performances in this video, as well as the process for taking them through a branching narrative. What was this somewhat non-traditional recording process like for you and your actors?


Luis Antonio: The biggest challenge was to convert a non-linear branching flowchart of conversations into something digestible and readable for actors. The script was too big to be memorized, so we created detailed bios for each character, from birth until the loop starts, allowing the actors to understand their character motivation, no matter what situation we would throw at them. We also made sure the sessions were organized in a semi-chronological way. They recorded their lines together as much as possible, so they could bounce off each other's energy, giving us an organic and believable performance.


For the cast, I can’t speak for their experience. Still, I admire how they could record a ton of specific exchanges with subtle variations (depending on all the combinations that might have happened up to that point) and always make it dynamic, engaging, and fresh. They brought depth and complexity to the characters that didn’t exist before, and we even ended up doing some rewrites after the initial recordings so we could use as much as possible the richness that they were bringing to the experience. 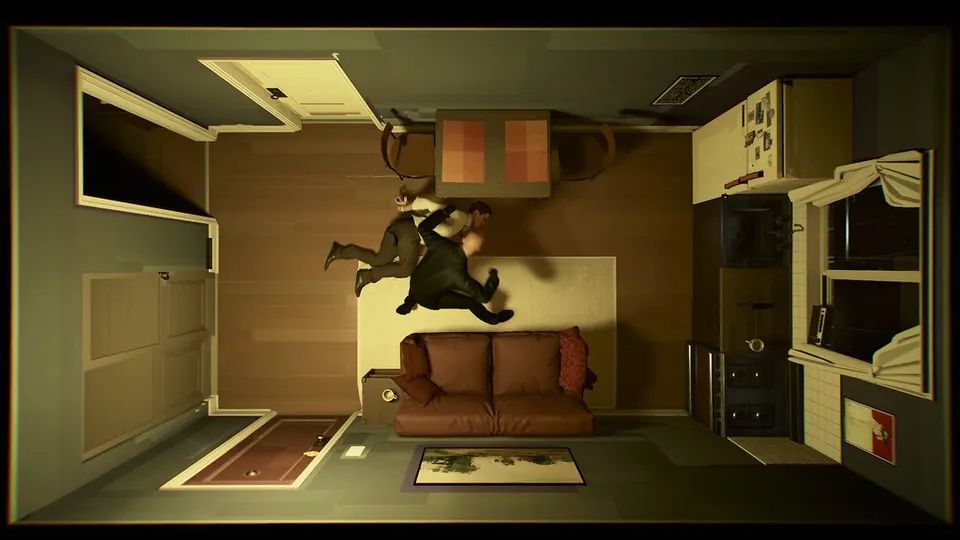 In my short time with the game, I ... didn't get very far. However, I managed to do a number of stupid things like accidentally ruining a special evening. How challenging was it to build in consequences for all sorts of choices and behaviors that unpredictable players like me might make?


Luis Antonio: Once the core mechanic of repetition and accumulated knowledge was working and was fun, the design process became about ‘removing’ all unnecessary noise to make sure the player focuses on what is essential without any distractions. Every element in the final version, from the layout of the apartment, sound design, colors, objects, and dialogues, is working towards this goal.


Alongside this process, I wanted to create a clear set of verbs for how you interact with the world (e.g., drag cup to sink to fill it with water). This way, the moment you step into the apartment, it’s apparent what you can and cannot do (e.g. you understand that you can’t drag the couch to block the door).


With these principles in mind, the unpredictable behaviour of the players became manageable and welcomed since it will always move you towards the themes we’re exploring. (And [some certain situations you test out will] become relevant later on).


Are you more interested in the technical approach to gaming, like the eventual speedrun strategy for Twelve Minutes, or the artistic side, like exploring all the branching options of the story and where they lead?


Luis Antonio: A bit of both. I’m curious how gamers will react to the lack of clear objectives and interpret the situation they are put in. Each loop, you get breadcrumbs that open possibilities, but this playspace is all in your head, the apartment never changes, and everything resets. It’s up to you to decide what to pursue, and I find that pretty fascinating.


As a game developer, the core of the experience started from a gameplay approach. And this being a game about repetition, I’m curious how speedrunners will define the ‘ending’ of the game and how much of the hidden stuff we created will be found. 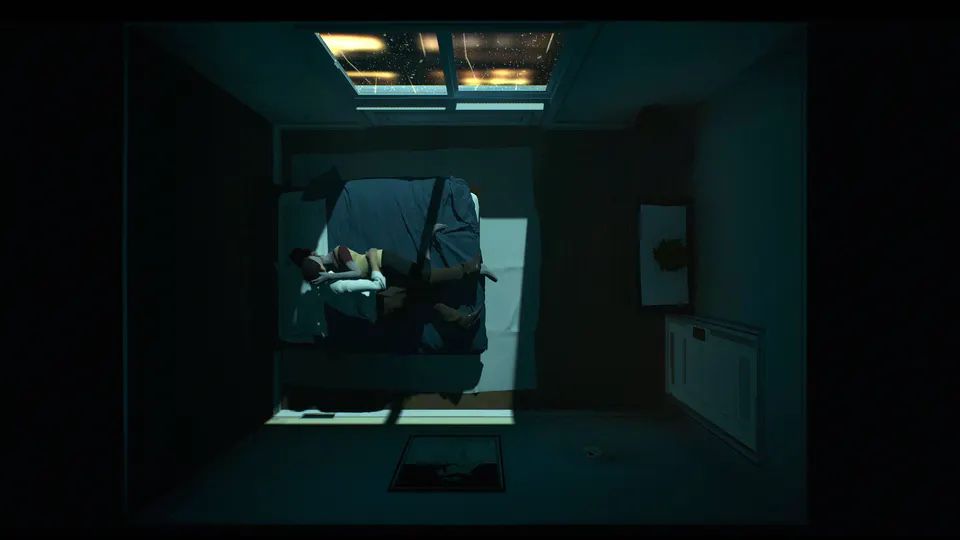 I couldn't help but notice The Shining-inspired carpet leading to the apartment in the very beginning of the game. Can you namedrop some other Easter eggs or cultural points of reference that made their way into Twelve Minutes?


Luis Antonio: There are quite a few, but I can’t mention them without spoiling the game.


What did you learn from making this game that you wish you had known when you started, something you might apply to a future game?


Luis Antonio: There isn’t anything I wish I had known, because if I did, it wouldn’t have arrived at what it is today!


Some of the most challenging moments ended up being crucial decisions that shaped the final result. But I can say that if I knew how much work it is to do a dialogue-driven game, I would probably not have started it in the first place.


As for lessons for the future, by far the biggest one is in how to approach the creative process, nurturing an environment that allows the ideas to grow and take the shape they need. Money and time being two significant elements that you don’t want to be dealing with.


Another one is how much I learned on how to deal with stress, tensions, juggling several challenges simultaneously, and finding similarly minded collaborators who are as passionate and creating room for them to be at their best.


What's up next for you?


Luis Antonio: First I need some time off. It’s been about a year and a half since I took a vacation, and I need to recharge my batteries before embarking on a new adventure. I have a couple of ideas that I think are pretty cool, and I can’t wait to dive into prototyping them and see what they’ll turn into.