Given the right combination of chemistry, talent and perseverance, two people can accomplish just about anything a larger team could. Some of the most enduring art of our time was willed into being by two minds joining as one in a perfect symphony of expression; The Coen Brothers. The White Stripes. Spongebob and Patrick Star.


Published by Devolver Digital and out now on Xbox and PC, is a third-person isometric action adventure game developed by Acid Nerve, a studio that certainly qualifies for , given that it’s a two-person team based in Manchester, UK (alright, the lists 8 people, but Mark Foster and David Fenn are credited with the game design, programming, animation, level design, story and writing and music and sound, so, you know - almost everything). Their previous game, Titan Souls, was released in 2015 to positive acclaim.


In Death’s Door, you play as a crow known simply as Reaper, wielding melee weapons, arrows and magic through various imaginative environments in pursuit of the souls of the dead. When a soul assigned to the crow by the Reaping Commission Headquarters (an oppressive bureaucracy straight out of ) is snagged out from under him, he’s thrown into a larger mystery revolving around power-hungry beings who’ve managed to outsmart death. As its recipe, the game takes heavy inspiration from a host of action adventure greats; it starts with a base of Legend of Zelda in its top-down presentation and simple but weighty combat and puzzles; adds a tablespoon of the Metroid series with new abilities opening up traversal and combat possibilities; and finally, sprinkles in some for good measure in its use of gloomy environments, gigantic bosses, literal souls and a large marquee that splashes on the screen when you die (this one simply reads DEATH).


With so many games out there vying for your attention, here are the 5 reasons why Death’s Door should be at the top of your list. 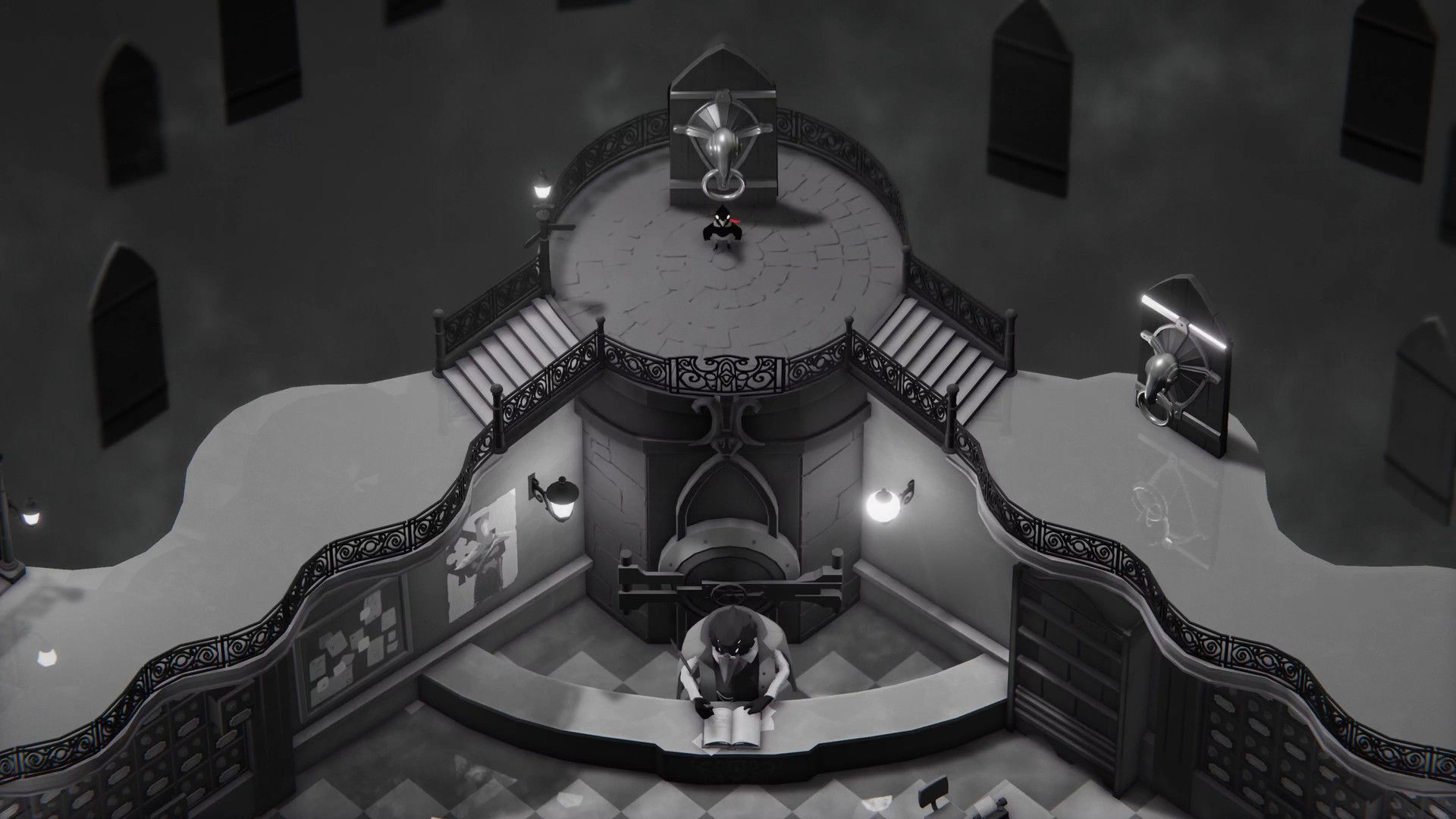 are certainly having a moment, with their entry into AAA status with this year’s and recent indie games like Curse of the Dead Gods (arriving on Xbox Game Pass today) keeping the faith alive. Here’s the thing though - despite initial impressions, Death’s Door isn't rogue-like at all. It’s much more along the lines of a traditional game, where death isn’t a full-on reset, rather simply a setback.


That’s not to say the game isn’t difficult. With only a few pips on your health bar, it’s inevitable that you’ll die again and again. But this isn't the controller-flexing difficulty of a Returnal or a Souls game. Though your move set is limited, your avatar crow is a nimble death-dealer, able to swipe, roll and shoot off magic in rapid-fire order. Standard enemies can be threats, especially in numbers, but they are typically dispatched with just a few hits. Bosses are intimidating in size and multi-phase, but have telegraphed patterns that once memorized, essentially guarantee your victory through perseverance. While enemies do respawn upon your death, there’s no loss of progress, gear or money upon failure. Respawning places you at the last door you exited from the hub world, but levers remain pulled and shortcuts remain open, making the trip back less onerous. In a nod to the bonfires of the Souls series, there are pots sprinkled throughout levels that allow you to plant healing Life Seeds, where you can stop and replenish your health bar. There’s no need for the risk/reward calculation of bonfires though, since using them doesn’t reset the level.


Blending the perfect balance of challenge and pacing isn't easy, but Death's Door manages it with aplomb, and it wraps at exactly the moment you'd want it to. Clocking in at about 10-13 hours depending on your completionist tendencies, Death's Door is perfect for folks who enjoy finishing games they start within a reasonable time frame.


It Rewards Your Obsessive Exploration 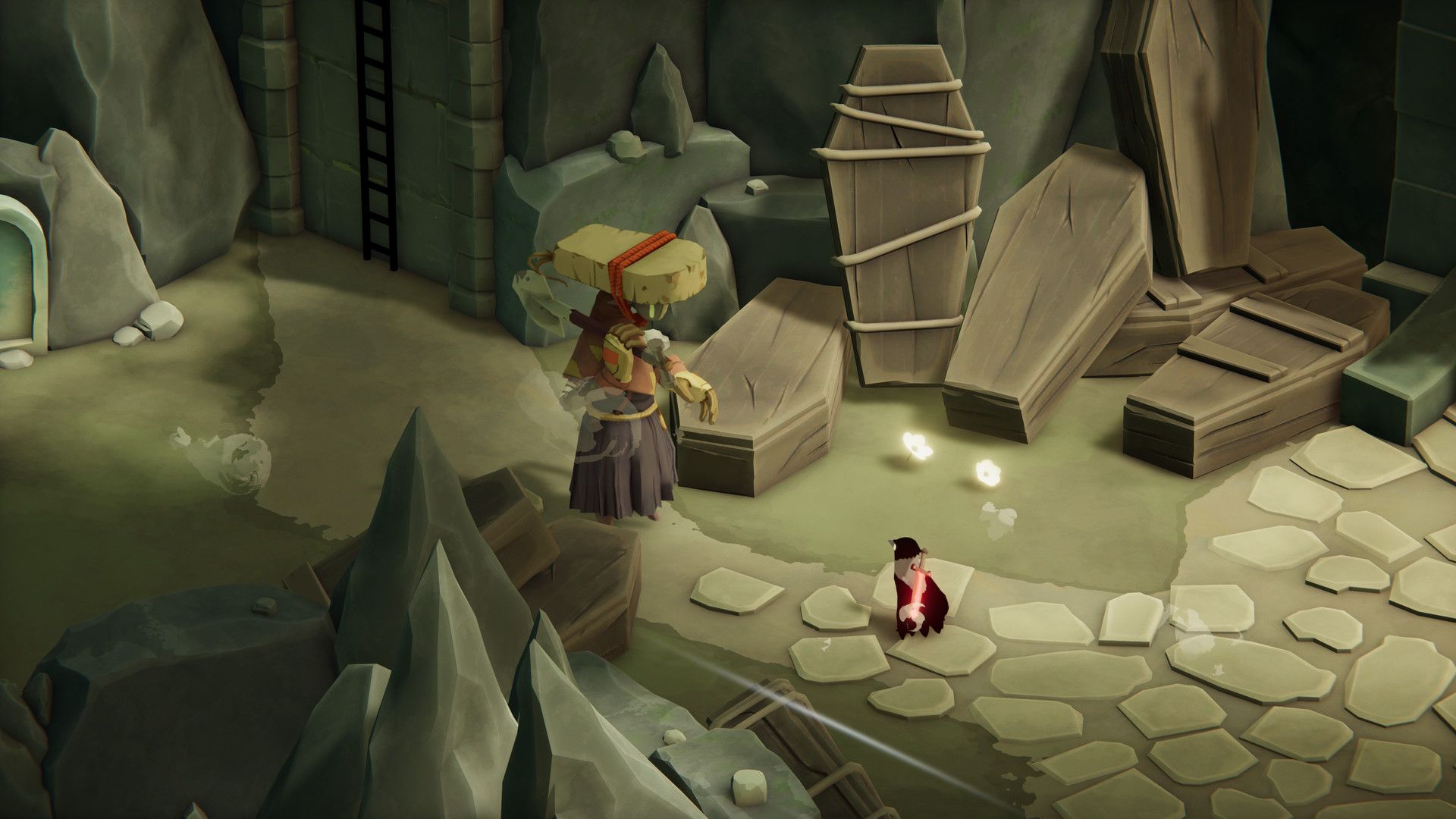 For some, going off the beaten path in a game isn’t a distraction, it’s a compulsion. If that’s your bag, Death’s Door is here for you.


Just as a bout of swearing is expected (some may say even essential) during any DIY home improvement project or IKEA furniture assembly, in Death’s Door, getting lost is just part of the process. There is no map feature in the game, so stumbling around the large levels can seem intimidating in the early going - push through that phase and you’ll start to understand there’s a method to the madness.


Curious exploration is how you’ll discover the essential shortcuts and through ways that will make moving through the level more efficient. It’s how you’ll notice elements you can’t quite interact with or parse out at the moment, knowing they’ll likely open up with the discovery of some new traversal power or key. It’s also how you’ll discover hidden passageways, collectibles, Life Seeds and the characters that populate this universe. Speaking of characters…


It Has a Wonderful Cast of Characters 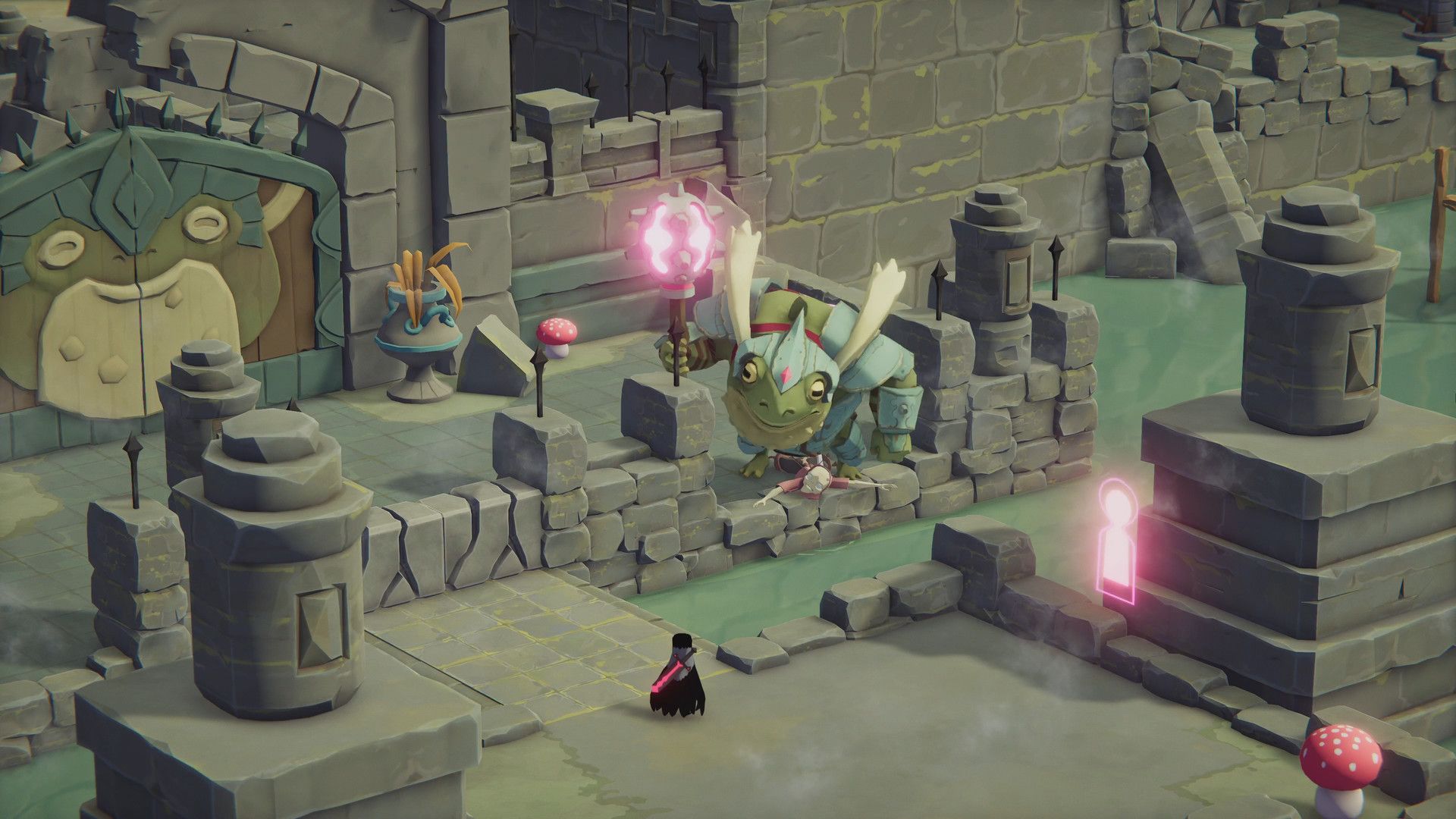 Though the world of Death’s Door presents itself as grim, it’s populated by wonderfully odd lifeforms that provide a very wry sense of humor to the proceedings. One of the first characters you run into during the opening moments is Chandler the Handler, a fellow crow and bureaucrat at the Reaping Commission Headquarters. He’s got a juicy job for you - the reaping of a giant soul and a commiserate large commission. “But be careful,” he intones, “If you die, it’s gonna be a lot of paperwork, and I don’t have the time.”


There’s Steadhone the Gravedigger, who wears a headstone for a hat. Though his very purpose is the digging of graves for the dead, he is unable to die himself and seeks ascension. Players may get the feeling there's something more sinister behind his defeatist attitude. Another memorable character, Pothead, pays homage to Siegmeyer (aka The Onion Knight) from Dark Souls 3, who players may remember for his distinctive onion-shaped armor, his love of ale and the healing abilities of his Estus soup. Cursed by the Witch of Urns to wear a literal pot of soup for a head, Pothead isn’t the fighter that Siegmeyer is, preferring to spend his days tending to his garden (what’s he growing exactly? His name may contain a clue). Upon meeting him, he bows, soup sludging from his cookware-coddled cranium: “Judge me not by the shape of my head, but by the deliciousness of the soup inside!”


Then, there’s the parade of magnificent bosses, including the aforementioned Witch of Urns and her mansion of ceramic crockery; the Frog King, who’s boss fight is introduced with a running litany of his honorary titles such as “King of the Swamp”, “Devourer of the Indolent” and “Destroyer of All Those Who Would Question His Rightful Rule or Look At Him Askance” (in addition to many, many more); and a vision-impaired yeti named...Betty.


It Has Sublime Art Direction & Music 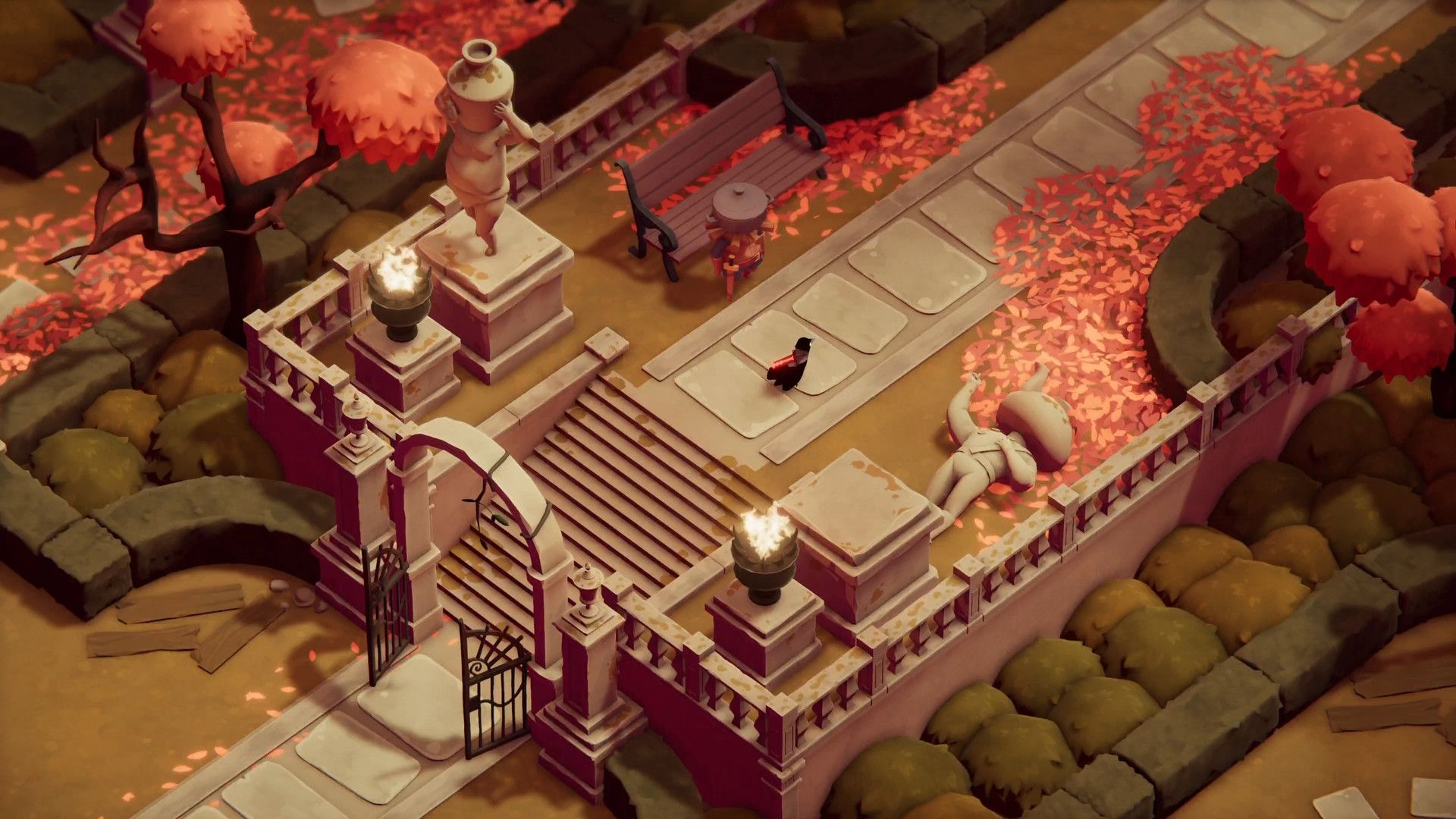 Every environment and character in Death’s Door exhibits a level of artistry that has to be seen to be believed. In stills, it’s a painting. In motion, it’s a Studio Ghibli movie in glorious top-down miniature, where every rain drop and fallen leaf seems to have been lavished with loving attention. From the film-noir inspired halls of the Reaping Commission Headquarters to the gothic architecture of The Lost Cemetery and beyond, the extraordinary attention to detail is present in every nook and cranny. Case in point; during the Witch of Urns boss fight I was so entranced with the way broken pieces of crockery on the floor would react to the bosses’ sweeping movements that I lost concentration, died, and was happy about it because of what I witnessed.


The animation of our anamorphic protagonist crow in particular is a master class in art direction. He leans ever so slightly forward during his walking animation, his steps kicking up dust or scattering leaves underfoot, and rolling knocks a few feathers loose. His lightsaber-like starting weapon hits enemies with a satisfying cleave (and blood splatter!), and highlighting every swipe is a lovely red light trail. Just moving the little guy around is a joy.


Harkening back to the original pastoral Legend of Zelda soundtrack, David Fenn (who also wrote the beguiling Moonlighter soundtrack) has created a magnificent orchestral sound design that complements and enhances the on-screen activities - combining virtual strings, piano, flute and more with drum loops and synthetic sounds to create an evocative symphony that is essential to the overall tone of Death’s Door. It’s also well worth listening to on it’s own, lending a haunting, epic air to walking your dog or ordering delivery. 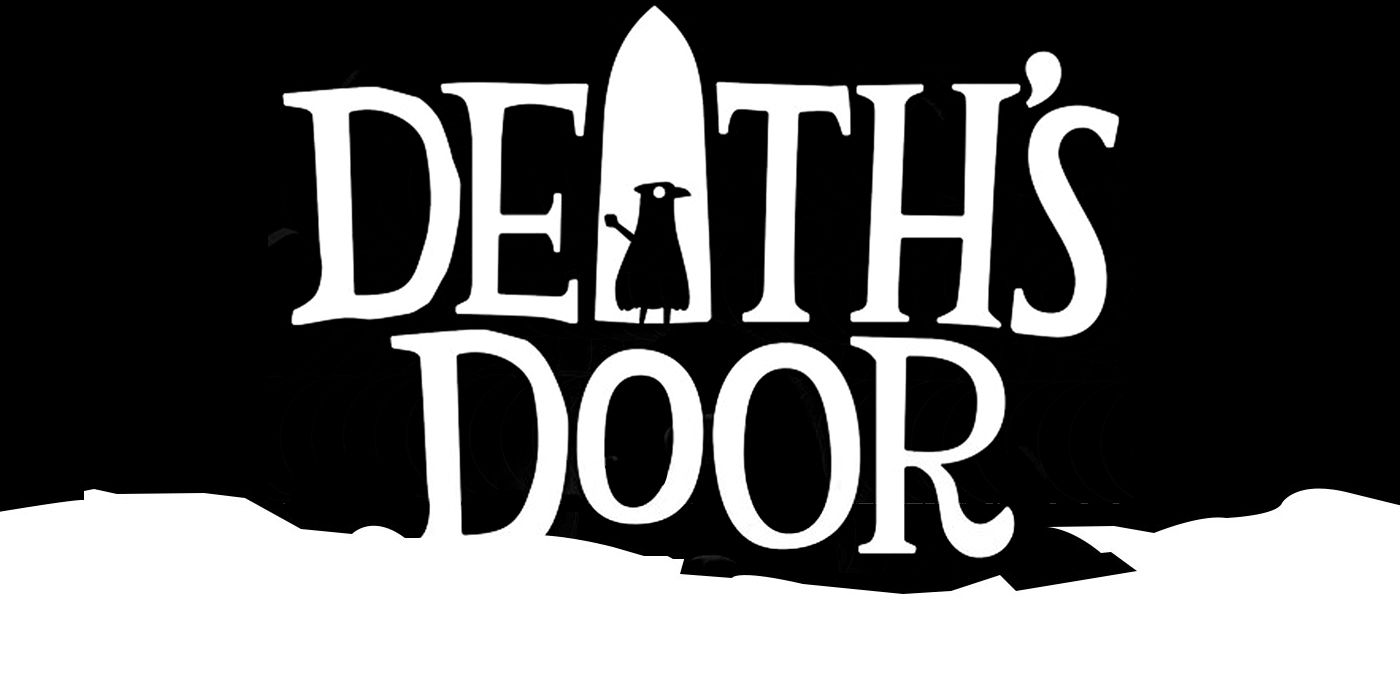 With its Legend of Zelda vibes and various cribs from a host of excellent games, Death’s Door can come across like a nostalgic knock off, but playing it will disauge anyone of that notion quickly.


Its themes on the inevitability and acceptance of death, and the extraordinary efforts some might take to prolong their time on this mortal plane for as long as possible, are universal and timely when so many have lost or are losing loved ones in the midst of a global pandemic. Its sense of humor, while verging on hipster-tweeness at times, is smartly reigned in and given enough irony to be charming and funny, And while the mechanics aren’t boundary-smashing (though you do actually smash literal boundaries), they’re wrapped in such a tightly designed package to feel completely of the moment. So while Death's Door does a masterful job of capturing the heart and soul of classic action-adventure games, it does so in a way that transcends tribute to become a gem in its own right.