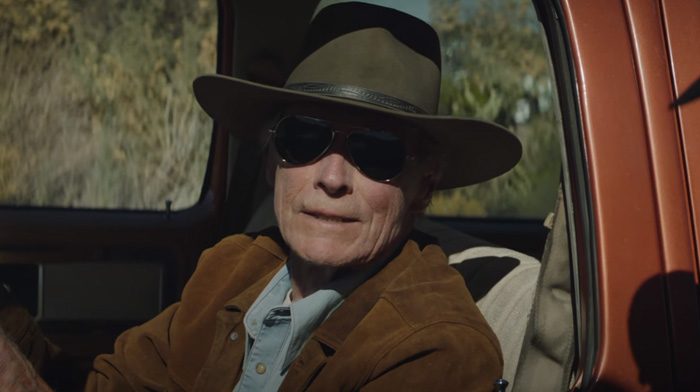 He’s at it again, folks. Clint Eastwood is back directing, producing, and starring in a new drama called Cry Macho. The film stars Eastwood as a washed-up rodeo star and horse breeder who takes a possibly dangerous job to bring a former boss’s young son home from Mexico.

Of Cowboys and Cockfights

Eastwood is 91 years old, but that’s clearly not going to stop him from making more movies about himself as some kind of ancient white savior. In Cry Macho, Eastwood stars as Mike Milo, a gruff old cowboy who takes a job from his ex-boss (Dwight Yoakam) to go down to Mexico and retrieve his son. After retrieving the boy, played by newcomer Eduardo Minett, they must take the deserted backroads on their way back to Texas. The journey is tough, so they need to be tougher. Along the way, the unlikely pair find unexpected connections and Milo searches for some kind of redemption for his life.

“It’s about a man who has been through some hard times in his life and then unexpectedly another challenge is brought to the foreground,” . “He would normally never do it but he is a man of his word. He follows through. And it starts his life over again.”

Part of him starting his life over again appears to be his connection to a cockfighting rooster, seen throughout the trailer. Maybe Eastwood figured he could pull a Nicolas Cage with his smash hit Pig by having a barnyard costar. For his part, Eastwood appreciated working with the bird.

“The rooster would do exactly what he’s supposed to, everything, it was very simple and kind of fun,” he said.

More from the Man Behind The Mule

Cry Macho has faced a long journey to make it from page to screen. There have been many attempts to adapt author N. Richard Nash‘s 1975 novel of the same name. Actors ranging from Arnold Schwarzenegger to Pierce Brosnan and Burt Lancaster were all attached to star at certain points. Eastwood himself was in negotiations to star in another version back in 1988, making his eventual return to the project nearly 30 years later quite a feat.

Eastwood last appeared in his own project, The Mule, about a man who puts his work before his family. Older folks can’t get enough of the former Man with No Name, however, so there will be an audience for his movies as long as they’re around.

Cry Macho will also feature Fernanda Urrejola (Blue Miracle) and Horacio Garcia-Rojas (Narcos: Mexico). The movie’s sure to at least look great, with BAFTA-nominated director of photography Ben Davis (Three Billboards Outside Ebbing, Missouri) behind the camera. The screenplay was co-written by Nash and frequent Eastwood collaborator Nick Schenk, who penned the scripts for The Mule and Gran Torino).

Cry Macho opens September 17, 2021, in theaters and on HBO Max on their Ad-Free plan; it will be available on HBO Max for 31 days from the theatrical release.