‘Copshop’ Trailer: Gerard Butler vs. Frank Grillo in the Battle of the B-Movie Kings 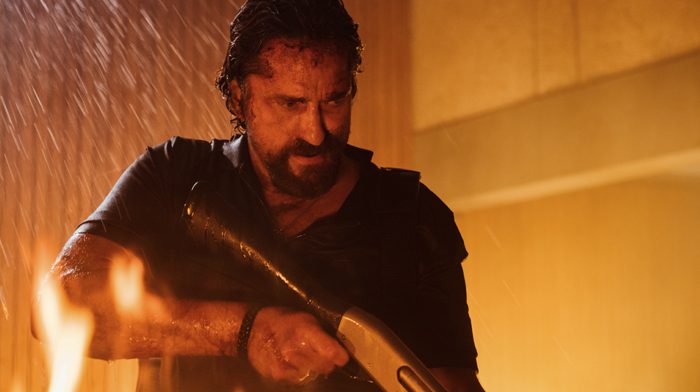 If he’s not careful, director Joe Carnahan (The Grey) is going to accidentally create some sort of B-movie nexus event. His latest entry into the genre pits Gerard Butler (Den of Thieves) and Frank Grillo (Wheelman) against each other in an action thriller that feels extremely indebted to the work of filmmaker John Carpenter. Check out the latest trailer below.

Carnahan got his start in the late ’90s with a low-budget action movie called Blood, Guts, Bullets, and Octane, and carved out a niche for himself in Hollywood making testosterone-fueled action flicks like Smokin’ Aces and The A-Team. He has occasionally dipped into different territory – he made a soulful plane-crash survival thriller (The Grey) and a small-scale crime film about a limo driver who transports a deranged madman (Stretch) – but he returned to his grungy roots with this year’s Boss Level and continues to embrace his genre predilections with Copshop, which is essentially his opportunity to put the ol’ Carnahan spin on John Carpenter’s Assault on Precinct 13.

Fans of Butler’s down-and-dirty action persona should find a lot to like about this, and the presence of Grillo (a longtime creative partner of Carnahan’s) provides a somewhat level playing field. But it looks like a psycho played by Toby Huss (Halt and Catch Fire, The Invitation) is hellbent on causing chaos in the police station where Grillo’s character is being held, and I’m curious to see how much of a factor the cop played by Alexis Louder (The Tomorrow War) will be when all is said and done. I wouldn’t be surprised if she ends up being the stealth protagonist of the whole film.

Carnahan wrote Copshop with Kurt McLeod, who only has one short film credit to his name from more than a decade ago, and he’s producing alongside Grillo, Butler, Alan Siegel, James Masciello, Tai Duncan, Warren Goz, Eric Gold, and Mark Williams.

Tearing through the Nevada desert in a bullet-ridden Crown Vic, wily con artist Teddy Murretto (Frank Grillo) hatches a desperate plan to hide out from lethal hitman Bob Viddick (Gerard Butler): He sucker-punches rookie officer Valerie Young (Alexis Louder) to get himself arrested and locked up in a small-town police station. Jail can’t protect Murretto for long, and Viddick schemes his own way into detention, biding his time in a nearby cell until he can complete his mission. When the arrival of a competing assassin (Toby Huss) ignites all-out mayhem, mounting threats force Viddick to get creative if he wants to finish the job and escape the explosive situation.