The next Sundance will be in-person and fully vaxxed; Dune star Jason Momoa wants a very long version of Dune; Matt Damon clarifies his position on a certain “f-slur”; looking back at the Spider-Man movie that was not to be. All in today’s Movie News Rundown.

Release  the Villeneuve Cut: Jason Momoa, one of the stars of Denis Villeneuve’s upcoming Dune, hopes for the release of a very long version of the first of the two films in the two-film series. “You know what they need to do? They need to make the four-to-six hour version of the first half,” he told . “It’s like, ‘Let’s watch the four-to-five-hour movie like a TV show; I can choose when I want to watch the whole thing.’ I want to see Denis’s whole vision. I don’t want it to be trimmed.” Momoa starred in both the original Justice League and the very long Snyder Cut of Justice League, so maybe he just wants all movies to work like that.

‘Not Your Mama’s Diversity Program’: The Rising Voices initiative is a collaboration between the job listing website Indeed and Lena Waithe’s Hillman Grad Productions, and you can learn more about how it works — and how you can take part — by with Hillman Grad production president Rishi Rajani, Indeed’s Lafawn Davis, and several finalists in the program, who received $100,000 to shoot their films. (The quote at the start of this item comes from Davis.)

Cannon ’86: At the 1986 Cannes Film Festival, Cannon Films — the company best known for movies like Superman IV and Over the Top — announced plans for a jaw-dropping 60 films, involving big names like Al Pacino, John Travolta, Whoopi Goldberg, and Roman Polanski. They also planned a Spider-Man film, years before the blockbusters starring Tobey Maguire. So what happened? Dan Delgado explains in the latest episode of his documentary podcast The Industry:

Is It on and ? Yes, just click on those links.

Tribeca Dates: The 2022 Tribeca Festival will take place June 8-19, 2022 at various indoor and outdoor venues throughout New York City. Submissions for the 2022 Festival for all categories including: feature and short films, episodic storytelling, and more. 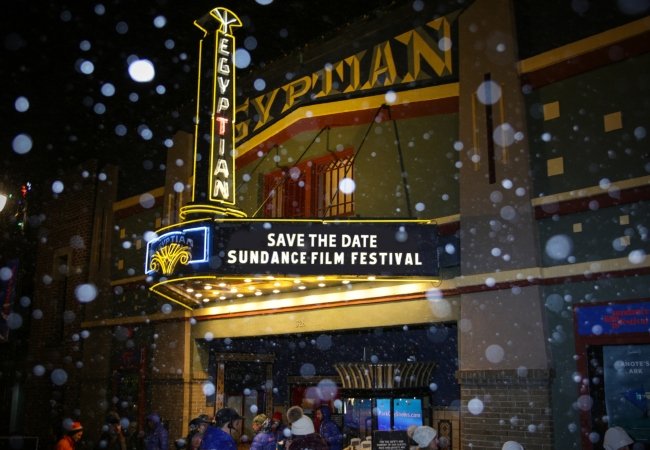 Park City’s Egyptian Theater, where you’ll need to be vaccinated to watch a movie at the 2022 Sundance Film Festival. Photo courtesy of Sundance

Matt Damon Clarifies: After anger over the Stillwater star appearing to say that his daughter convinced him just “months ago” to eliminate a certain homophobic “f-slur” from his vocabulary, he clarified in a that he has “never called anyone ‘f****t’ in my personal life and this conversation with my daughter was not a personal awakening. I do not use slurs of any kind.” He added: “And given that open hostility against the LGBTQ+ community is still not uncommon, I understand why my statement led many to assume the worst. To be as clear as I can be, I stand with the LGBTQ+ community.”

What Did Damon Originally Say? “I made a joke, months ago, and got a treatise from my daughter,” Damon told . “She left the table. I said, ‘Come on, that’s a joke! I say it in the movie Stuck on You!’ She went to her room and wrote a very long, beautiful treatise on how that word is dangerous. I said, ‘I retire the f-slur!’ I understood.”

I Initially Thought: Maybe he was volunteering that he’d used the “f-slur” as an olive branch to anti-PC red state dudes in the hopes that they would go see Stillwater, about an Oklahoma dad who sets out to save his daughter from legal trouble in France. We may never know the full story, but we do know this: Someone might have benefitted from my mama’s diversity program, which was really good, for an early ’90s diversity program run by my mom. Are there things everyone would do differently? Of course — too many Simpsons murals and reworked Bell Biv DeVoe songs. But it was a different time and everyone did their best.

You Know What? Here you go — enjoy the first of the Rising Voices interviews: