Wyatt Garfield is the cinematographer for Nine Days, from writer-director Edson Oda in his feature directorial debut. In this What’s in your Kit? feature, Garfield writes about staging the two realities of the reality-bending sci-fi drama and the equipment that helped him achieve Oda’s vision.

Writer-director Edson Oda imagined a rich visual logic for Nine Days well before I came aboard, so we were able to spend our time getting very specific about how to capture it. There are two worlds in the film: the after-life limbo in which the protagonist is trapped, and reality, which he observes through the eyes of living people by way of televisions in his home.

The “limbo” takes place in an old house, which we shot with an ARRI ALEXA Mini with Elite Anamorphics. We wanted to feel that the house itself was subtly bending and breathing and not totally concrete, so we tested some older anamorphic glass. With Kowas and the other vintage lenses we tried, the distortion was so strong it felt more like the viewer’s perspective was warped. Jack Allred, our camera source in Salt Lake City, suggested the Elites, which had just the right amount of character.

“Reality” was photographed with various lightweight cameras rigged to helmets and other headgear, depending on the action. We added many strange items to our kit to pull these off. 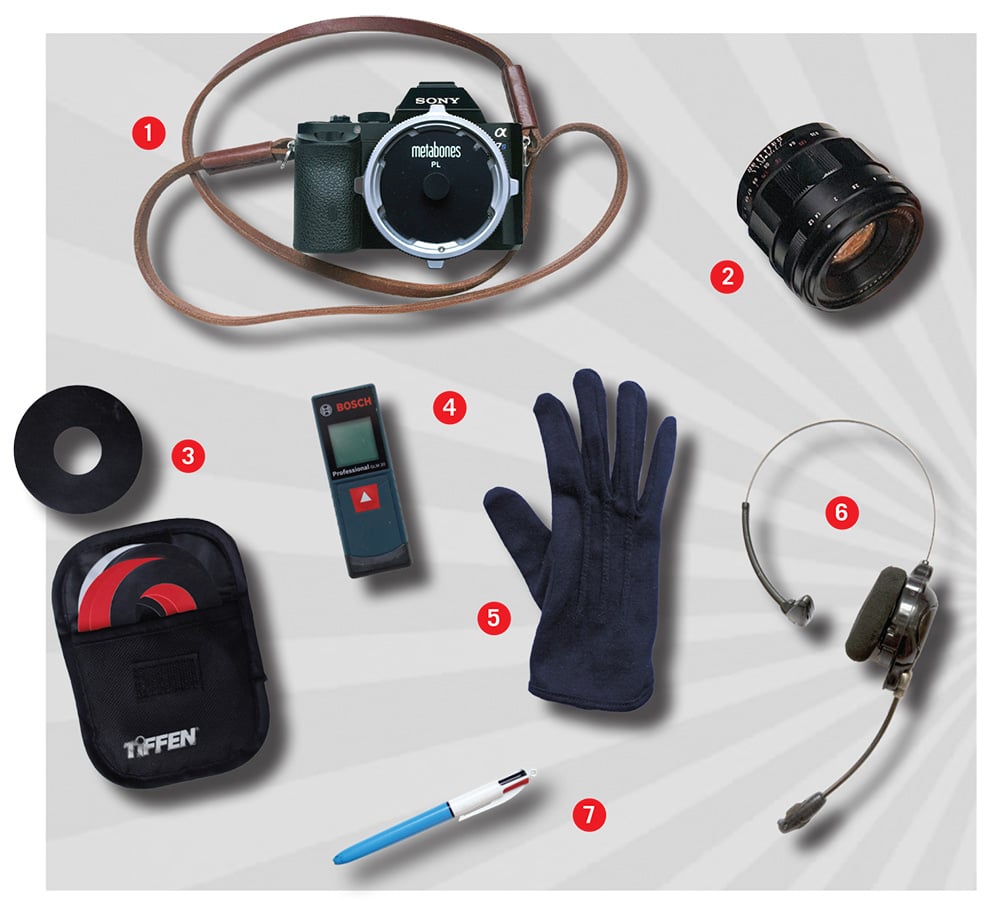 This is the viewfinder we used on Nine Days and videos I did for The Lumineers. I used to rent ground-glass finders for this, but it’s nice to flip back through rehearsals and show options to the director.

This lives on the A7S when it’s off set. Great for scouting, rough camera tests, and photography.

These little donuts narrow the coverage of lenses, barreling and vignetting the image. Panavision came up with a system for swapping them out on Beatriz at Dinner, for which I was the DP, and camera operator David Stragmeister ran with the idea and made this colorful variety pack.

For scouting. Stage rafters may be lower than advertised!

Great for fast in-camera vignettes, nightmarish abstractions, and making hands disappear in reflections. We also used these on Mediterranea to cover the lens and let flashes of light in for a lightning-storm effect.

Having a direct line to the gaffer, key grip, AC, and operators makes the set a very quiet, controlled space.

AD Cedric Vara re-introduced me to these grade-school novelties. They allow you to add many more layers to diagrams before they become completely incomprehensible.

A familiar onboard monitor, great for its adjustable false-color. You can easily slide the colors up and down the scale to identify where a value is landing, or to set a target value.

Small enough to fit most EU sockets, and you can stash them anywhere.

I try to give actors something more interesting to look at then a piece of tape.

This was just for Nine Days: We used it to seal water in cellophane candy bags and squeeze them in front of the lens to create a crying effect for POV shots.

What item can’t you live without?

PL viewfinder. I really like finding frames during rehearsals, and lining up the next shot before moving equipment into position. Often the first thought is the best thought, but if you’re free to hunt with a viewfinder you never know what you might find.

What do you consider an indulgence?

I wish I wasn’t so dependent on coms but they really help me stay in the zone.

What’s the next piece of gear you’d acquire if you could?

I’d like to try an Artemis Prime, or build out my A7S PL finder a bit more.

Nine Days, directed by Edson Oda and lensed by Wyatt Garfield, opens in theaters on Friday. Main image (above): Wyatt Garfield on the set of Nine Days. Photo by Kota Ishida.