When I was a kid, stuck fishing from shore, I looked upon anglers on boats with envy. I would have given anything for a fishing kayak. If only I could get out into that deep water. You know… where the real fish are.

These days, I’d rather fish from a kayak than just about any other craft. A fishing kayak can be maneuvered into tight spaces where a traditional fishing boat can never hope to go and provides an opportunity to fish secluded spots inaccessible from shore.

The best fishing kayaks are quick and agile while offering the stability to make casts and battle big fish without tipping. It’s a rare combination, but there are some truly great fishing kayaks out there. These are the best of the best. 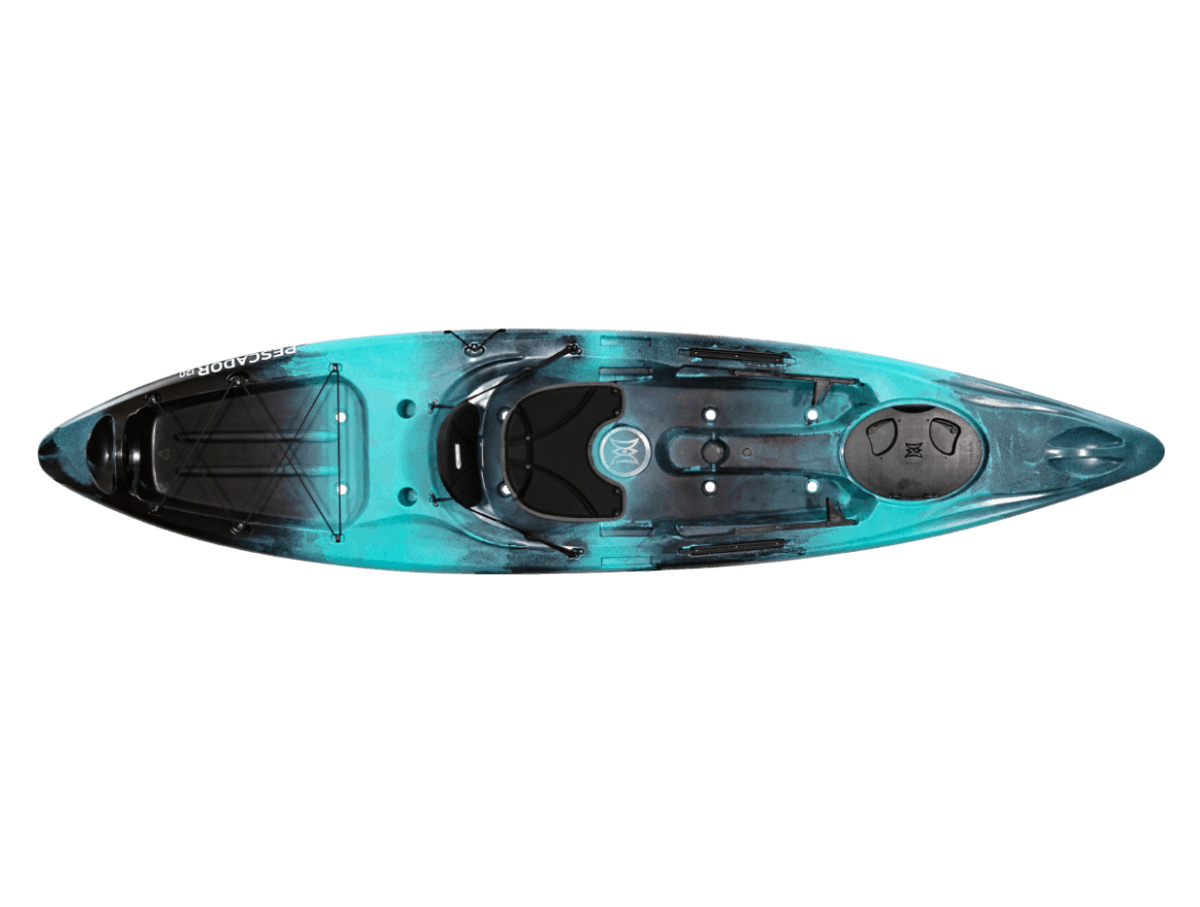 The Perception Pescador is a venerable fishing kayak that’s been an angler favorite for years. This 12-foot, sit-on-top model offers the stability one needs to tackle big fish on slow-moving rivers and streams.

Thanks to its multi-chine hull and tracking keel, the Perception Pescador 12 is agile and maneuverable as well as stable. It also has a broad shoulder to accommodate larger paddlers and thick ventilated seat padding for comfort and support.

The Perception Pescador 12 also gets top marks for safety, with leak-proof one-piece construction. The hull is also resistant to impact, abrasion, and UV rays, and the hardware is optimized for saltwater.

From a fishing standpoint, one of the great things about the Pescador is its ample storage. It has two rod holders and large open rear storage in addition to bungee lashing and gear tracks for accessorizing.

For kayak anglers who are ready to take their adventures to the next level, the Hobie Mirage Pro Angler 360 Series represents the pinnacle of fishing kayak technology. It has six rod holders, front and rear storage hatches, an elevated seat, accessory rail, and an extra-wide hull for stability.

Hobie Mirage Pro Angler kayaks are propelled by foot pedals, which has a couple of significant advantages. First, it keeps your hands free, which is a big advantage for a fisherman.

Second, it allows unprecedented agility. The Hobie Mirage Pro Angler can turn a full 360° circle in place, something no traditional kayak can do. It allows you to get into tight spots in pursuit of fish, and quickly shift between pedaling forward and backward.

The kayak has an impact-resistant hull, and the fins that propel it are designed to retract automatically when they bump up against a rock, log, or other objects. It’ll make you the envy of the lake.

Inflatable kayaks get a bad rap sometimes, but the Intex Excursion Pro Kayak is head-and-shoulders above most inflatables. It’s made of tough laminate PVC with a polyester core and is highly resistant to impact, abrasion, and sun damage.

The Intex Excursion Pro Kayak has three-chamber construction and a rigid I-beam floor for stability. It’s comfortable and lightweight, making it easy to get to the most remote fishing waters. Fully inflated, it measures 12’7”.

Features include adjustable footrests, two-rod holders, and a mounting bracket for fishing accessories. A pump, air pressure gauge, carrying case, and paddles are also included. If there’s one area in which this kayak falls short of traditional models, its speed and agility.

As with any inflatable kayak, some caution is required when handling sharp objects (i.e. fish hooks). The PVC surface is tough and abrasion-resistant, but not entirely puncture-proof.

Sun Dolphin has earned a well-deserved reputation for producing quality kayaks that won’t break the bank. Their Journey 10-foot model is a great choice for anglers, with a sit-on-top design and comfortably padded seatback.

The Sun Dolphin Journey 10 is a little more compact than some other fishing kayaks, which makes it great for getting into secluded fishing spots. It’s ideal for ponds, small lakes, and slow-moving streams. It’s also light and easy to carry.

This kayak tracks straight and paddles well, with excellent stability. It’s not exactly built for speed, but it’s surprisingly lithe in the water. The Sun Dolphin Journey 10 has plenty of gear storage, three-rod holders, and bungee deck rigging. 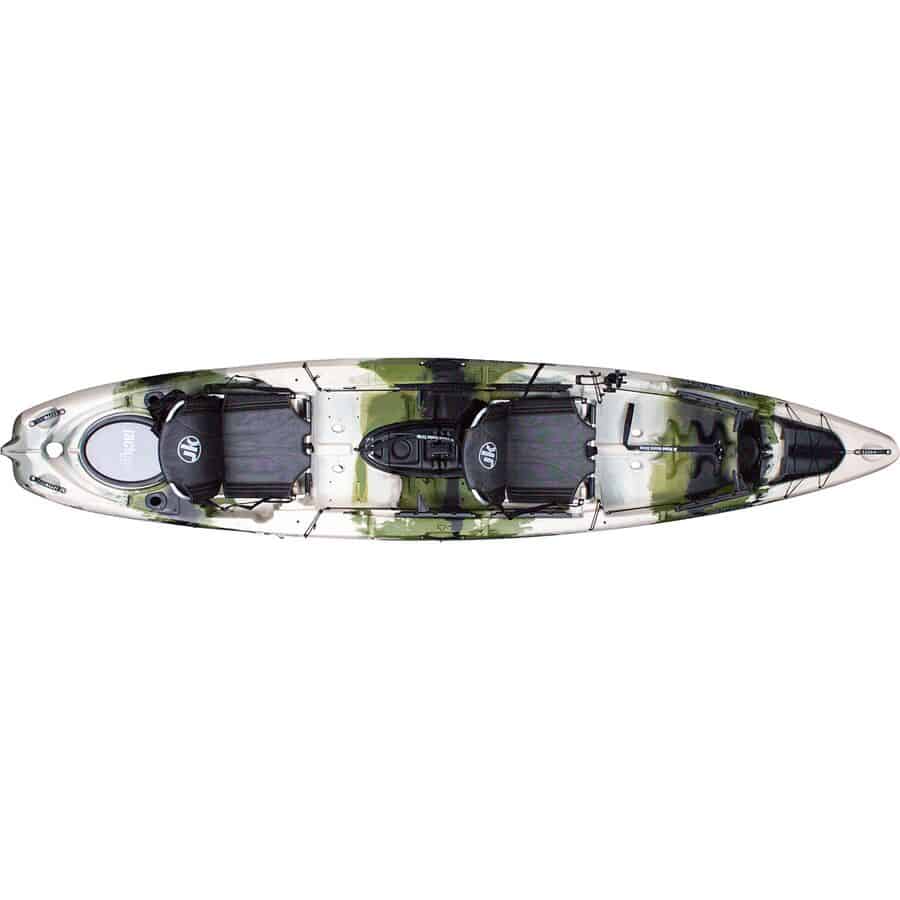 Measuring 36 inches wide and 14 feet from stem to stern, the Big Tuna from Jackson Kayak earns its name. It works as a tandem or solo-fishing kayak, and its oversized design gives you extra stability for pursuing big game fish on larger waters.

All the details of the Big Tuna make it clear that this kayak was designed with anglers’ needs in mind. The elevated seats rotate to provide multiple fishing positions, and its rugged polyethylene hull is available in two low-visibility color patterns to avoid spooking the fish.

The Jackson Kayaks Big Tuna Kayak has a lot of cool features, including scupper holes, water bottle holders, dry storage hatch, and rod tip protectors. It tracks straight and true and is surprisingly fast for its size. 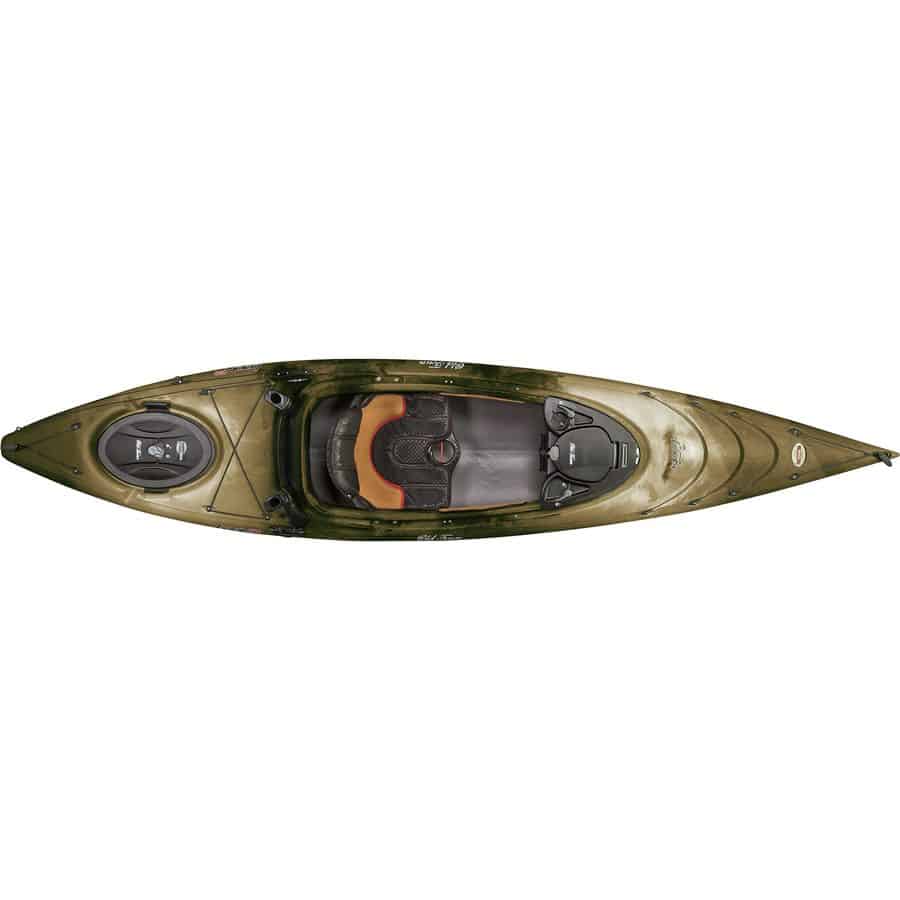 The Old Town Loon 126 Kayak is a beautifully designed fishing kayak, with sleek contours and a sharp keel line that makes it quick and nimble on the water. It’s great for bass fishing, with a low-vis camo brown color pattern.

Measuring 12’6″, the Loon 126 has two flush-mounted rod holders, a watertight stern hatch, and bungee deck rigging. It also has an anchoring system and a USB port and battery storage for plugging in depth finder and other electronics.

The Loon 126 is a sit-inside kayak. The main advantage of that is that it keeps you drier, and protects you a bit from the wind, which is ideal when you’re fishing in chilly weather. If you prefer a sit-on-top model, Old Town’s similar Predator 13 Kayak is worth considering.

A tough kayak for a wide range of fishing situations, the Lifetime Tamarack Sit-on-Top Kayak is designed to be a dependable fishing buddy. It’s made of rugged polyethylene that makes it resistant to impact and abrasion.

The flat bottom of the Lifetime Tamarack Kayak offers great stability, but it won’t win any speed races. Even so, it has a sharp bow and tracking skeg that make it maneuverable and straight-tacking. It’s a solid design for most anglers.

One area that could bear improvement is the storage hatches, which open up into the main hull cavity, making it easy for gear to roll away and become hard to reach. It does have a comfy seat, dependable rod holders, and convenient handles for lifting. 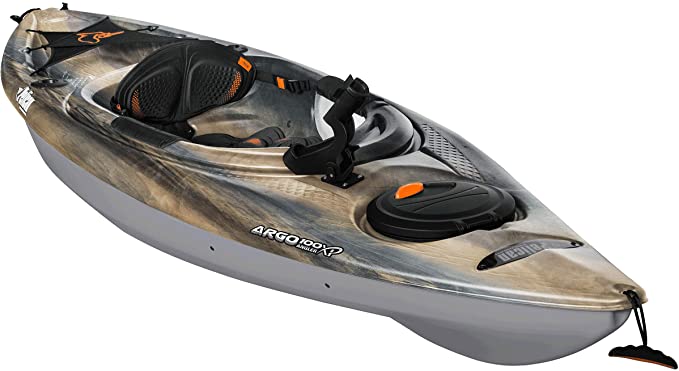 Pelican makes a diverse line of quality, budget-friendly kayaks, and their Argo 100XP Angler model is one of the best for fishing. It’s a 10-foot, sit-inside kayak with a spacious cockpit, rear storage tank, mesh deck cover, and adjustable seating and footrests.

This kayak is also fairly light at just 41 pounds (that’s an advantage of the sit-inside design) and has carrying handles that make the transition from bank to cartop easier. It has two vertical rod holders built into the hull, plus an additional flush-mounted rod holder.

The multi-chined hull is both stable and straight-tracking, and the Argo 100XP gives you great speed and agility. It’s a perfect kayak for beginners and experienced kayakers alike and does well on lakes and calm rivers.